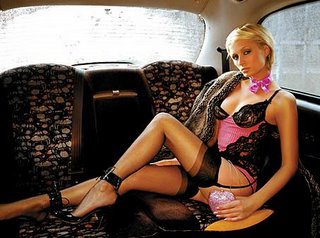 Slate's pop music writer Jody Rosen makes a case for Paris Hilton potentially amounting to being something more than a smirking Barbie Doll with her foray into pop divahood. You can already feel the incredulity grabbing the back of your neck, right? Paris Hilton's attempt to become a pop diva or to otherwise break into the pop music game is fraught with peril and doomed to failure. Not grand, flaming failure, but ignoble, quickly forgotten failure, like Tim Leary's attempts to become a stand up comic. It's one thing to view Madonna these days, remembering when she was making her name as a musical performer, and view her now as spent, irrelevant, the sort of used up Professional Celebrity who used to populate games shows like Beat the Clock or What's My Line? We can still trace her career back to when she was
doing something innovative and marginally interesting, just as the curious can actually discover a list of films that Kitty Carlyle or Orson Bean had made when they were working actors. There is some dignity in their station as Has Beens. Paris Hilton, though, is a Never Been, foisted upon the world Famous and Useless from the start, a brightly colored box, full of air. She'll try her hand at various show biz niches--movies, reality shows, now music--and there will be core of
pundits who'll hyperventilate with superlatives about her emerging force, but no one will buy it beyond the next commercial. History is a Big Broom, ruthlessly applied to the likes of Paris Hilton. She can sit next to Dagmar when she ascends to Celebrity Heaven.
at July 25, 2006