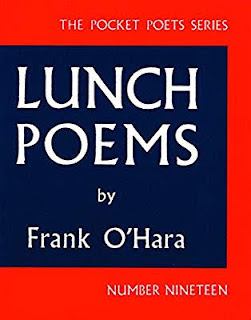 It's been fifty-four years since the publication of Frank O'Hara's seminal book "Lunch Poems:, which means that I was twelve when it first appeared. It was a small book, part of Lawrence Ferlinghetti's Pocket Poets series on his City Lights imprint, and it was one of those books you saw everywhere you went as a young person in search of experience, ideas, and kicks  of a sort; it was on bookshelves and stuffed  in back pockets all over the map, especially the city map. Reading Frank O'Hara was one of those authors you had to read in order to feel current with the alternative culture. Despite the book's ubiquity when I was a teen and a young poet/musician/critic looking to make a mark, I didn't read the volume until I was in my late twenties, after a couple of other poets I'd made friends with strongly suggested that my own work resembled O'Hara's. Curious, of course, I dug up the copy of "Lunch Poems" I bought a couple of years earlier, along with a stack of other assorted texts and which I had also left in said stack.  How much my work resembles O'Hara is something for others to suss out, but I will say that I had made a new friend ; the poet's ebullient breeziness, his disdain for the formal conception of profundity, his ability to write a poem that seems wonderfully to capture the sense of an alert mind noticing the city and its citizens and the work and play they do simultaneously is, I think, one of the miracles of modern poetry. With its abrupt beginnings, swooning affection for the tacky, the tarnished and frayed, with its emotions obviously and playfully at the surface of all things engaged, O'Hara transformed the lyric poem; he brought the lone voice speaking of its adventures closer to the thriving verve of accelerated jazz.