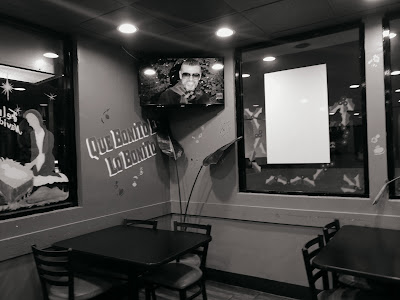 Over the years I rode the bus several times a week with this fellow, who, I realized, was bit of bore who liked to engage in a form of passive-aggressive bragging, dropping odd things about himself in conversations he lured other bus riders into. This included exaggerating his abilities absurdly. He wrangled me into listening to one of his bits of grandiloquent self-praise once and mentioned he was multilingual. I said "Really", honestly not caring. He went on, offering more non-essential information,'Well actually, I sing in 6 languages."
"Do you speak and read 6 languages?" He paused, then continued, seeming annoyed.
"No , I sing opera and I sing in Latin, Italian, French, German..."
"And you don't speak or write or read in those languages?"
"No, but what I do is an unusual skill..." Now i wanted to end the conversation. "So you're singing phonetically is what you're telling me..."
"Yes". "Well good for you, that must be hard t do, but it's not so special. Kinda so what?, in fact. " He rose out of his seat a little.
"Sit down, Mr. Souffle" I said.

He sat , I got off the bus. In the intersection two guys had gotten out of their pick up trucks during the red light and we punching and grabbing each other awkwardly. When the light changed, they got back into their trucks and sped away, presumably to the next traffic light for round two.
at December 03, 2017