LOUISE GLUCK AND THE MUCK SHE INSPIRES 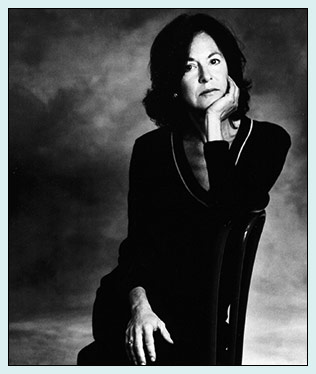 The length of In the Cafe, appearing this week in Slate, would have you think that author Louise Gluck is a monologist. That's not the case, we find; a skilled monologist will have a point or an effect they achieve, more often than not. Gluck's poem long lines are merely that, long, un-inflected, without snap or spice. Instead, we have a droning account of a male friend who happens to be a serial romancer--a sensitive male who absorbs portions of women's lives and energy over a period of time and then leaves them for the next adventure. It's not that this isn't worth writing about, but this is more topic drift development, an exercise in killing time. Gluck doesn't even go through the pretense of trying to make this intriguing as poetry and offers up the stale device of disguising undistinguished prose in irregular line breaks.

Gluck's long-form poetry is part of the disparaged School of Quietude,as Ron Silliman has called it. the conservative conglomeration of professional poets who's careerism controls the major book contracts, literary awards and plum teaching assignments who's market-pleasing style, a gush of self-infatuated musings that prefer to leave the reader hanging in murmuring waves of uncommitted relativism--the sort of work that doesn't move you to think beyond your conventional wisdom but leaves you anxiety-ridden in the decorated fringes of your misery. The attitude, among the worse offenders, seems to be gutless, indecisive, reflective rather than reflexive, passive rather than active in the world. One appreciates stillness and the sharply observed detail independent of an interfering ego, but that is not what Quietude, in the worst of it's the world, is about; the poets seem to be bothered that they were cursed with compositional skills. You read them time and again and come away with the idea that a requirement among this coterie is to speak of themselves in their work as attempting to have an experience. You can feel the shrug since the poet dropping his pen, you can nearly hear the soft swearing under his or her breath about the perception being too hard to convey with wonder, awe, as a miracle in itself. That is to say, complacency wins again and the prospect of changing one's loathsome circumstance is too frightening. One would rather suffer with what they know rather than dare a single footstep in another direction. The worst of this kind of poetry, I've heard, is like a three hour forced tour of your own living room.

Hers is better described, perhaps, as the School of Drone, a kind of outlining of unexceptional incidents involving straw figures wherein a reader suffers what would have been a tolerable three minute on-air NPR essay about a diminutive epiphany stretched egregious lengths. that provoke involuntary teeth grinding. One doesn't really care about Gluck's portrait of a man-in-process; she attempts a neat inversion in maintaining, toward the end, that this man wasn't wasn't a bastard nor a feckless creep. By the time she grapples with her reasons for having sympathy for her comrade's quest for enlightenment, we are out of sympathy with her tale. This becomes the melodrama you switch the channel from.It's cut-rate of D.H.Lawrence, but without the erotic intensity. She does, retain Lawrence's rhetorical bulk. Like him, she sounds like she's trying to talk herself into believing her basic premise as well as the reader, a trait that makes "In the Cafe" a dry lecture that hinges on a vague and brittle point. This poem is the equivalent of the bore at the party who continues to prate although everyone else has gone home and the lights are turned off.

Adding to the despair over this poem's glacial pace is the promise of the first lines, which are bright, with a hint of witty resignation; It's natural to be tired of earth./When you've been dead this long, you'll probably be tired of heaven. It's a perfect set up for a story of every man's quest for the place where he might find contentment in love and spirit. But where there might have been a telling comedy that provides the moral that our expectations undercut what we assume is our virtuous yearnings instead turns into a drab recollection. No time is wasted in weighing down the promise of the first two lines with the leaden grouchiness of the second two:.

You do what you can do in a place
but after awhile you exhaust that place,
so you long for rescue.

This gives the whole game away.I wonder if this would have worked far, far better if Gluck had written this as a short story. The prose -quality of these lines might have bloomed a little more, breathed a little more air, the scenario might have been more compelling. The first lines are terrific and they could have been a poem by themselves, a condensing Gluck seemingly wants nothing to do with. Being succinct has amazing advantages.It provides an ending, a place to land. Gluck and other writers --myself at times--often mistake raw length for more substantial writing. Some writers have the gift to go long and reward the patient reader.Most do not, and few of us are Proust, few of us are Whitman, few of us are early Allan Ginsberg.
at October 18, 2017