the kids took over the city dump 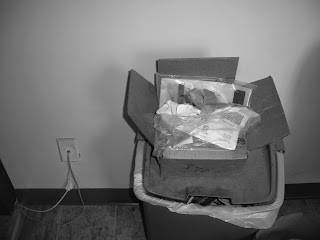 In revelations still dawning, that hindsight suggests that if  the Sex Pistols had never come to being, someone would have been compelled to invent them. In fact,  someone did, Malcolm McLaren, an experimental fashion designer who felt that the music current at that time in the 70s--lots of Led Zeppelin, Eagles ,Journey and the Who being replayed beyond death and into the spinning rings of limbo--wasn't a suitable backdrop for what he wanted, a style, attitude , manner, a way of thinking relevant to the current wave of alienated youth. The 60s utopianism was a bad joke at this point, a snicker and a fluid snort of disgust at the mention, and the 70s up   til then amounted to nothing much of interest happening in music or radio.


The pretentiousness of the musicians and the gullibility of the audience had choked off the life force that made rock and roll exciting and worth caring about. Some of it might be laid at the feet of rock criticisms since the advanced discussions of Dylan's relationship to Chuck Berry's everyman existentialist demanded a musical technique and lyrical concept just as daunting. This is the danger when folk art is discovered: it stands to become something distorted, disfigured and bereft of vitality. I was lucky , I guess, in that I was a fan of the MC5 and Iggy and the Stooges long before the Sex Pistols caught the punk wave. They and bands like Blue Cheer and Black Sabbath were a grounding principle--rock and roll are beautiful because it's energetic, awkward, and stupid, but profoundly so. There are "concept albums" I admire and still like, if not listen to, but I won't name them here.
I am pleased, though, that the idea of the Album being a literary object has been dropped in a deep grave and had dirt thrown over it's bloviated remains.I miss albums, though. I like holding them, reading them, mediating on their physicality while listening to the record. It was part of the experience of absorbing what the musicians were doing, instrumentally and lyrically. Albums made you think that their size and shape were part of the home you made for yourself--house, room, cave, apartment--and that the collection of them, along with books and other such things marked your growing interest in the world around you. Now it seems like disembodied noise too much of the time piped into devices, not really played nor considered before the music commences. It seems much of the time like a streaming hurry to get done with the whole thing and then move onto another distraction which , as well, will provide no real reward.
at September 28, 2016