The case for making sense against the the professional sense makers 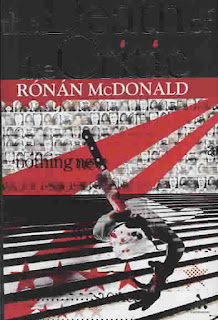 A buddy had just finished a book I'd lent him, The Death of the Critic by Ronan McDonald, and was convinced that the theorists needed a severe pounding. His language was such that I had to put the phone down and answer the door for the pizza delivery man. When I got back and picked the phone up again, he was still ranting, unaware, it seems, that I was gone for a couple of minutes. He's a high school pal, someone who like no matter the contrasts in cultural preference, and he likes a critic to perform the service of being a consumer guide.

He likes mysteries, Clive Cussler and true crime books, and all he wants is a synopsis and brief evaluations on whether he'll get his money's worth. I have no idea why he wanted to read the book, but he was fired up enough to be convinced that the Usual Suspects McDonald lays out for literary criticism's demise--French theorists, multiculturalism , feminism, variations on the postmodernist riff--had conspired to irritate him .One might understand the response, as in any of those times one volunteers a statement, heartfelt but visceral, not cerebral, about a book they read and enjoyed that might have happened to be the subject of conversation. Once you make your remarks, add your few pennies worth, some smart ass chimes in with caterpillar-length words and odd ideas from two or three different disciplines and leaves you there, lost and humiliated.

That happened to me when I was younger , much younger, mouthing off my platitudes about arts and politics, but rather than getting angry and nurturing a resentment, I was determined to become one of those smart asses, or at least sound as though I belonged to the club. My friend, though, craved his resentments and continued variations of his anti-intellectual beef over the last forty-some years. I assume most of us have friends like that. It was an exasperating conversation. Finally I got him off the phone and made a mental note to not lend him any more books having to do with literary theory or the history of ideas. Rather, I'll offer him some Elmore Leonard. There is a writer we can probably talk about.

On the topic of the book ,it's not that the literary critics are dying as much as people have pretty much ignoring them, preferring the pseudo science of theory, which prefers to wallow in a choking , jargon-clogged solipsism to writing that actually engages a book and it's style, the author's intentions, and the successes or failures contained therein. At some point a generation of young academics hitched their fortunes on the diffusing forces of continental philosophy because they found a method through which they could abnegate their charge to aid readers to sharpen their skills.Literature, by whatever definition we use, is a body of writing intended to deal with more complex story telling in order to produce a response that can be articulated in a way that's as nuanced as the primary work, the factors that make for the "literary" we expect cannot be reducible to a single , intangible supposition.

Use is a valuable defining factor, but the use of literature varies wildly reader-to-reader, group-to-group, culture-to-culture, and what it is within the work that is resonates loudly as the extraordinary center that furnishes ultimate worth, varies wildly too; there are things that instigate this use, and they aren't one determinant, but several, I suspect. The goal of literary criticism, ultimately, is not to create the terms that define greatness, but to examine and understand what's already there, and to devise a useful, flexible framework for discussion. Ultimately, the interest in useful criticism is in how and why a body of work succeed or fail in their operation, not establishing conditions that would exist before a book is written

Some of us who toyed with deconstruction and the like , when we found that language in general and literary writing in particular couldn't address the world as is,remember the sweetly slippery issue of inter-textuality. Promoted by Derrida and deMan, if memory serves me (and it often doesn't), this was the fancy footwork that while books fail to address the nature things and make them fixed, unchanging situations, texts (meaning books) referred only to other texts, and the coherent systems writers seemed to uncover or create about how things are were in practice drawn from a limitless archive of each text that came before the one you might have in your hand and considering it's fidelity to your experience.

A futile concern, we find, since everything has already been written, everything has already been said. If this were true, we asked, how can it be that some theorists are using language to precisely describe what language cannot do, i.e., precisely describe things? I never read a response that made sense, as the the answers seemed even more steaming heaps of gobbledygook that made the unanchored theory before even more impassable.Interestingly enough, the entrenched theoreticians, reticent to use the metaphorical techniques they had interrogated and attempted to render inert, weren't able to have their ideas stand outside the limits of their terminology and secure a comprehending response from the interested nonspecialist.

A pity, since science writers and even literary researchers themselves were able to explain in easier parlance the purpose, technique and consequence of the minute and verifiable data science was accruing. But no matter, because at the time one had discovered a nice hedge against having to read a book; I am being grossly unfair to the good critics taking their cues from Continental thought, but deconstruction and intertextuality were choice methods of not dealing with what a writer was saying, instead giving a jargonated accord of how all writing and discourse cannot get beyond itself and actually touch something that terms signify.
at April 27, 2016