some words about the art of Jill Moon 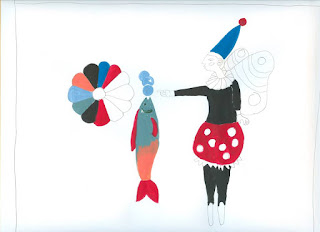 Jill Moon, a university professor, painter, set designer, glass artist, and doll maker who passed away this July, was a painter of distinct style and approach who hadn't been given a great deal of critical notice during her too-short life. This would be due in large part, though, to the fact that she retired from public life soon after she left her teaching position in set design and art history at Cornell. She did some design work for the theater, but she had no showings that I can remember. She willingly pursued anonymity that was her right. Jill didn't stop making art, however, and indeed her productivity was prodigious and prolific. Jill Moon's otherworldly figuration was a marvel. She was a dear friend of mine for the better part of thirty years and change, and it was my good fortune to "see her in action" as she took to the canvas with her paints, brushes, and assorted implements. Jill had a sense of how to bring the incongruous together and make it do work as if the disparate details--a fairy in a pope's Miter, leotards and a polka dot skirt, a red/green/orange trout standing upward blowing blue bubbles, a rainbow-crested dandelion waiting patiently for the fairy and the fish to notice its glorious impersonation of an umbrella--belonged in the same space. 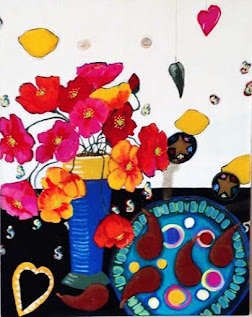 Poet Wallace Stevens' had a theory of the Supreme Fiction, that space between imagination and the real world that it's about to work upon, where the notions, ideas, imagery is worked out, arranged, finessed as though being fussed upon before going out the door for the business day, but always without explanation to justify their visualization or placement before the eyes of the observer. This was the sphere where there were no secrets, only matters you hadn't discerned yet, or explanatory narratives to connect her figures with a cogent suggestion of what makes sense in the reality they were brought into. 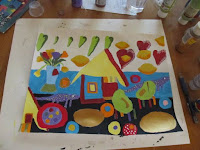 There was a painting Jill had done for a show of hers at UCSD that featured small, mischievous devils scattered about the color-saturated straits of a particular portrait. Someone asked her what they were and she explained, laughing so slightly, that "...they were devils playing with the other things in the painting. I painted them because I like them. What they mean is private. Actually, I'm not even sure if I know what they mean..."

I wouldn't doubt that at the time, Jill would have to create something that would contextualize the leitmotifs and tropes and her use of a flat style for a critical appreciation to be applied and calm those minds that demand how the contents of paint operate as a critique of how we live. Still, in the moment of creation and long afterward, she was taken with the joy of creating this space where instinct, dreams, mystery, and ominous ritual, combined in the odd and angular ways that fit Jill's idea of allowing forms to migrate, mutate, associate as they may. 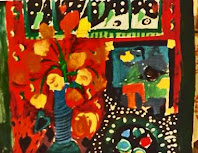 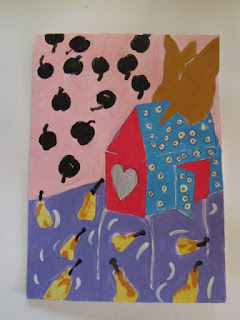 I remember Jill, in one of those graduate student bull sessions at the Pub following an art show she had been featured in, reflecting on the ideas of Derrida and deconstruction and the insight that because meaning is not fixed in a text, whether be it a book, painting, movie, play, saying that she gave her art over to the idea of play. "I don't think art needs to be about anything," she said firmly. I don't recall what she followed that declaration with. Still, I do recall many a conversation that artists can only be responsible for making the art and making sure that the pieces they introduce to the world have their own integrity, on their terms.  "What the painting means isn't my job," she said at one point, "that would kill the happiness someone else could have creating their own meaning and sharing it with others." Jill was taken with the idea that art had no commitment to reaffirm or even threaten an audiences' shared cosmologies; the artist wasn't required to speak to how the world does or does not work or dwell in the joys or depressions that art lovers might project on the campus.

The poetic analogs are obvious, I think, the first being Ars Poetica by Archibald McLeish.

A poem should be palpable and mute


As old medallions to the thumb,

Silent as the sleeve-worn stone


Of casement ledges where the moss has grown—

A poem should be wordless


As the flight of birds.


As the moon climbs,

Leaving, as the moon releases


Twig by twig the night-entangled trees,

Leaving, as the moon behind the winter leaves,


Memory by memory the mind—


As the moon climbs.

A poem should be equal to:

For all the history of grief


An empty doorway and a maple leaf.


The leaning grasses and two lights above the sea—

A poem should not mean