Ant Man: yes, a small fete, but nicely done all the same 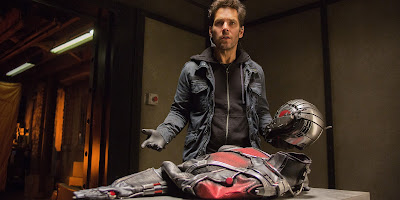 I always regarded Ant Man as the least intriguing super hero from the 'Silver Age" offerings form Marvel Comics.The problem was that AM's power, the ability to shrink to the size of an ant yet maintain the strength of a fully sized male and the ability to command ants to do his bidding, had limited applications in stressful situations. There were, and remain, super heroes who have skills and gimmicks that are of curious necessity at face value;part of the joy of seeing what could be done with Batman, Green Arrow, and others was how the writers could come up with a convincing dilemma in which the odd skills would be precisely the element needed to rescue the day. Ant Man didn't give that anticipation.One sensed that  writer Stan Lee and whoever else helped him with the scripts was reaching issue-to-issue for a predicament where Ant Man's limited skill set was what the contrived situation needed. I had low expectations for the movie and found myself pleasantly surprised.Director Peyton Reed's stewardship of this film reconfiguration of a one-dimensional comic book hero dredged up from Marvel's farm leagues is sure, swift, efficient. If not spectacular on a level with the first Captain America movie , Man of Steel or the Nolan Batman trilogy, it does the work a good comic book is meant to do on the psyche, pleasantly distract you from worry and wanting.

The plot was nothing to brag about, a standard mad scientist with daddy issues going rogue with a plot to rule the world (or at least ruin it altogether for a vengeance-motivated profit), but it was well paced, superbly edited, and the effects were smartly held in check and well used when they were deployed. What was impressive especially is how Ant Man's skill at shrinking can be handy in a fight, as in disappearing rapidly and just as quickly reappearing from another angle to sucker punch a hapless villain (or an expectedly sucker-punch prone henchman). Very cool stuff. And Paul Rudd was likeable as the well intentioned ex-con who is recruited by scientist Hank Pym (Kirk Douglas) to take on the mantel of being the  Ant Man. The fact that he seems a bit embarrassed telling people his silly super hero name is a winning touch.

It was the best that Marvel has done, but it was superior to the over-rated and needlessly busy Guardians of the Universe. Reed and credited screenwriters  Rudd, Edgar Wright, Adam McKay and Joe Cornish did the work of going to school on what is now recognizable as the Marvel Studios style of film, familiarized themselves with the formula and produced something that was created in the same mold as the Marvel films that have popped up in the last decade. I hesitate to say they "created" something here. A good way to think of this is that Ant Man might have been a decent car built by Ford, GM or Chrysler, a nice ride in most respects, but nothing truly distinct from anything else on the competing showroom floors. Just a nice ride, a professional bit of more-of-the-same. Ant Man is a film that accomplished it's mission, to entertain and distract for a brief period and then recede from recent memory. That these folks managed to do that without the usual dinner theater mellow drama and scene chewing that usually goes in Marvel's big ticket films is something else that recommends the film.
at July 20, 2015