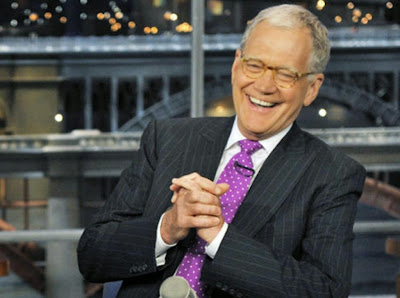 It has been remarked that  David Letterman, who last night broadcast the final episode of his long running CBS program Late Night, had become cranky and dour in his last few  years on the air, to  which I say yes, he had been a grouch a time  or a   dozen times when I   stayed up late to  catch his program.

But that was part of the man's appeal as a talk show host. There was the elusive Everyman quality about  him, liberally laced with a slickly restrained version of the Last Angry Man. Not angry, exactly, but more like fed up with the voluminous ego baiting that passes for notoriety and letting the air from the media's hot air balloon with three decades of sharp, absurdly accurate darts. There a sense in Letterman the way  he managed the helm of the Late Show, someone who kept his smile for the most part, who maintained his formal courtesy as  best he could , and yet we could see the ice  creak, we could witness the calm within get sullied by the winds of celebrity bullshit and the institutionalized idiocy of  those who deign to govern us. Letterman might have been cranky , but so are all of us at the end of the day, but rather than complain bitterly and without end that the bastards are at it again, he applied humor, much of if brilliant, in my view, that let a lot of the hot air from the problem-filled world that goes out of its way to ruin our serenity.

Letterman, as well, was among the first television host to expose the whole lie of show business and the false fronts millions are spent just so we don't see the facade breaking. The culture of celebrity is odd and odious and it was Letterman, before anyone else on the tube, really, who brought as sense of the absurd, the surreal and the genuinely strange to a medium that created a phony baloney image of reality and poisoned the culture with. Letterman, from his NBC show to his years on CBS, was the remedy to the on going simulacra that passed for entertainment. And, interestingly, he became more human as time went on, being very open about his heart surgery, the birth of his son, his extra marital affair and the attempt to blackmail him.

He was rarely mawkish about any of this, but he was, it seems to me, genuinely sincere in the feelings he expressed about the events. But most of all he was funny, he was smart and better read than even fans thought, and he a good conversationalist. He was the needed at the end of the day. Not a drink, but a good laugh, someone as bemused with the world as you were and who had the wit to say something about it that made an off kilter kind of sense.
at May 21, 2015