Harmonica playing can be dangerous 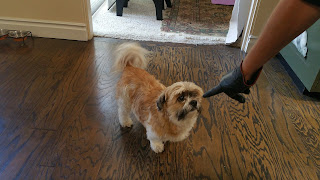 I worked in the carnival during the seventies, one of those guys in an orange shirt in a line up game covered in checkered and striped tarp and festooned with dusty stuffed animals who badgered you to play and win your girl friend "the big one". What a tale that is. After work one night in Costa Mesa, a bunch of us gathered at the "carnie entrance" to drink beer, bullshit and do whatever drugs were on hand. I usually played my harmonica, someone with a guitar would usually show up and a jam would ensue, which the other carnies, the lumpiest       of the lumpen, enjoyed quite a bit.

One night, though, I was playing  as usual, after work, kicking a slew of Butterfield and John Sebastian riffs, when I saw this large, beefy ride jock (the guys who operated the carnival rides) saying something to me. I leaned closer and asked him to repeat, and he repeated, but I still didn't understand him because I went back to riffing on the harp. I leaned closer still, turning my good ear toward him. He staggered a little , gave me a stare that would make fish float to the top of the lake, and croaked "how'd you like that thing crammed up your ass?" I set my beer down and pocketed the harmonica and then left through the carnie gate back toward the motel room.