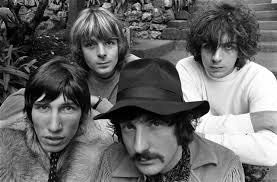 Rolling Stone has informed us that Pink Floyd, in order to celebrate the 40th Anniversary of the release of their admittedly brilliant album "Dark Side of the Moon, has invited fans to tune to their website this Sunday, March 24, in order to stream the record, in full. I can't help but think this is less the gift to fans than the band might think, since any committed fan of Pink Floyd likely already owns the album and has been listened to it relentlessly for decades; myself, I know precisely where every pop, skip and hiss occurs on my long lost vinyl copy.  All told, this is one of those records that has been around for so long and has been played so often that I wish I could condemn it as nostalgia, but I can't. It is a brooding, moody, poetic and richly textured end-of-the the-dream concept album, a masterpiece of disillusion that rivals, I declare, T.S.Eliot and his beautifully distraught "The Wasteland".

There is in both the mesmerizing defeatism of their respective projects; the shoulder-shrugging and firm embrace of the will to live fully have never found better, more seductive expression, both poem, and album. Refreshing in the music and lyrics of Pink Floyd, as well, was a what I think is unmistakable for the working class; along among British Art Rockers, PF avoided verbal drag and double talking allusions and planted their narrations dead center in a streaming disgust with the mess men have made of the world; politicians and corporations for being such greedy, short-sighted exponents of the profit motive and the misery index, and the common people, for believing lies told them and willfully buying into a fantasy that will only kill them all, sometimes quickly, sometimes slowly. "Dark Side of the Moon" and "Wish You Were Here" were two endearingly burnished sides of the same dented coin, legitimate and remarkable expressions of a lightly toxic worldview.

Predictably, with commercial artists contractually obliged to produce new work on a corporation's schedule, they ran out of fresh things to say; later records tended to be as dreary as dour music is supposed to be. England has a tradition of hippie art-rockers going sour as they edge into their thirties; Barrett had the good sense to just break down and allow his legend to simmer on low boil for decades. It is an accomplishment that he has managed to be that footnote in the Pink Floyd saga that ABSOLUTELY NO ONE FAILS TO MENTION. I like that he his name persists on the band's name and legend with no effort on his part. His actual story is sad, though, and he would be the first example I would cite when arguing that drug taking without medical need is intellectually indefensible. Waters, though, stuck around, had his moment of glory in which truly great work was done, but he became a boring old cynic bemoaning variations of a faceless, grey, corporate England divorced from a romantically envisioned past. He reminds you of that great sex you had after a cocktail party where you fucked the fried liver out of your partner and then waking up and seeing who it was you were putting it to, or who was placing it in your personhood. Ugly recrimination followed rapidly and you wonder what was worth this current cramping of one's expressive style. Roger Waters never sang about that. Pink Floyd could have used more Tom Waits and Captain Beefheart and less Basil Bunting.

Although I am sick unto death of ever hearing this album again, "Dark Side of the Moon" is a keen and sufficiently angsty expression of a generation's loss of idealism. Their narcoleptic music and vaguely saddened ruminations, in fact, are an extended impression of a very bad drug crash, when the good vibes of acid and pot became overwhelmed by the critical burn-through of methamphetamines. The irony is that for a band that has lampooned, bemoaned and besmirched regimentation with their mirthless minimalism, their goal, with the live streaming, is to get the last three citizens of the planet who haven't purchased the disc to buy it, finally, and to become a nonconformist just as the rest of us have always been. Like-minded free thinkers.
at November 15, 2013