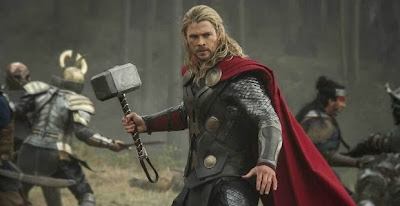 Save your cash on and skip the slow-moving, turgid and criminally inane Thor: The Dark World. It is an improvement over the first Thor film, but there is lethargy in all the action scenes. Nothing seems crisp or crucial in the physical battles, although there is some good cgi of London smashed to pieces by the invasion of the Dark Elves. Chris Hemsworth as Thor talks like a bad High School drama student who is trying to force his voice into a lower register--he sounds like he's trying to suppress a burp while he speaks--and there is a frown on his face through the film that makes him look as though someone gave him a shot of castor oil.Tom Hiddleson as Loki is inexplicable anyway you look at-- he fluctuates between glee, sorrow, and rage raggedly, scene to scene. Plus he is incapable of not looking like Data from Star Trek: Next Generation. Anthony Hopkins as Odin is utterly disengaged from the whatever is going on around him, and appears rumpled and ready for a nap, while Natalie Portman, consistently the least charismatic actress I can think of, moves through this movie in a variety of self-loathing postures, as though in pain realizing everyone she knows will see her in this expensive windup toy of a film.

A Thor movie could be entertaining if there was the right cast, director and script, a crew that had a feel of the source material, ie, the Marvel comic book, not the original Norse legend. This is an efficient, professional bit of filmmaking and does provide a moment or two of entertainment, but the cast is so indifferent--either  phoning it in or gnawing the scenery--and the plot points so diffuse, distracted and pitifully predictable, in blockbuster terms, that what we have is an expensive, noisy apparatus utterly without charm. What's missing is the grace, energy and, yes, basic good humor and humanity of the original Kirby/Lee comic book tales. Jack Kirby had an extraordinary visual imagination and a capable rendering of his version of Asgard could have been simply magnificent, magical even. What they settled for were computerized variations of  Shangri La from Lost Horizon. Worse, the make-believe city resembled a cross between Hearst Castle and an M.C.Escher painting. That, combined with the sluggish momentum this movie is barely capable of, is quite enough to make you calculate how much you worked to make the money for the ticket you bought to see something that finally made you feel like a moron for seeing. They've thrown a lot of things in the air for this juggling act, and too many things hit the stage they're playing on.
__________________________________

Getting around to some old movies, courtesy of the NetFlix miracle, and I decided to catch up on a Ben Affleck/Samuel L.Jackson film form more than a few years ago, Changing Lanes.  It thought it was a decent enough Hollywood "message" film, though it had the dopiest premise imaginable. 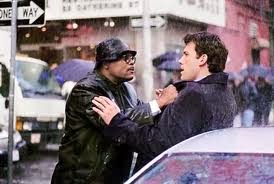 It's not that I object to happy endings -- in this case, each of the characters played by Sam Jackson and Ben Affleck realize the exact nature of their wrongs and wind up doing the right thing by the world and themselves -- it's that I want the fictional solutions to seem fictionally plausible. The concentration of the events into one day snaps credulity, and while you're wondering whether this is an alternative universe where there are 76 hours to a day, the film drags way too much in key areas. Jackson and Affleck are both quite good here, but in the crush of the events that are eating our protagonists up, there is too much reflection, too much self-examination, too much fortuitous circumstance for the characters to redeem themselves. The irony is fine, but Affleck's flailing do-gooding at the end is a stretch, theatrical without being dramatic.