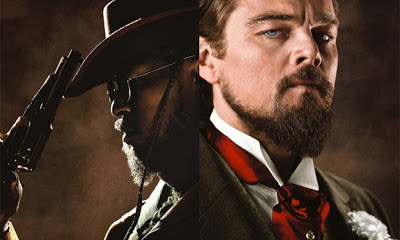 "Django Unchained   " is a listless bore.Save a couple of genuinely funny bits,this movie continues Tarantino's delusion that his style of hasty cross referencing film genres regardless of kind of film he is attempting to make is revitalizing,hip and slick.This sloppy, pace-less,talky attempt at ironic effect.QT is a one trick pony.You can not even say that he has a style;what he does seem more a grab bag of shticks sewn together like Frankenstein's monster.In this case,what is on the table remains a dead heap .It's no good to blame the messenger for QT's latest venture in cinematic tedium. I wanted to like the film very much and kept waiting for some convincing, if stylized storytelling . The principle fault was pacing, which was pokey and slack. Genius though his dialogue may appear on the page, or the computer screen, Tarantino doesn't seem to have learned that film dialogue, even the conversation we consider "literate" or "bright", requires a ruthless efficiency.

The constant references to the cheesy tics and tacky tropes of old exploitation movies in the work of Tarantino as passed the point of being homages, tributes displayed in new films that, in themselves, are legitimate extensions of durable genre. Cringe as he might, Tarantino has created his own kind of formalism, a post-modern template in which the borrowing of elements from other films is no longer a clever, brilliant and innovative method of transgressing boundaries and revealing but has rather become what seems a knee-jerk response to a challenge to make a certain kind of movie. I agree with the assertion that there is a certain clubhouse knowingness about his films that distance the typical viewer from enjoying his films; the genius of genres is that the true masterpieces in Western movies, war movies, crime dramas, et al, is that they go well beyond the expectations of hard core fans and appeal to a greater audience that recognizes something greater than the mere satisfaction of genre expectations. To coin a phrase, the cliquishness is a buzz-kill and is, I think, more than cynical in attitude. All this mix and matching , bric-a-brac, and pastiche mongering assumes, by design, that surprise is no longer possible with film narrative and that what film makers need to be are little kids taking a hammer to the toys they are bored with. That is not my idea of a fun date.

The characters here, especially those played by Christoph Waltz and Leonardo diCaprio, chatted up considerable dust storms of hyperbolization that would the dialogue equivalent of a jazz soloist improvising for too long .This is at the sacrifice of momentum, a quality that isn't achieved in "Django Unchained"- try as I might to suspend my disbelief, I was never convinced that the inevitable reckoning would result in the catharsis that even a hipster variation of a Jacobean revenge tragedy requires as a matter of form. Humanity and all its layered awfulness--lust, greed, avarice, revenge, slavery, racism, all those rotten instincts that create tension within individual characters who try to abide by codes of honor, decency and respect who then are transformed into somethng much uglier and wrathful--are summarily smothered by Tarantino's heavy hand and instead used as premise-giving props as the writer/director hits all the generic marks. In doing so, QT seems like a less than agile man learning how to dance, following the shoe prints laid out on the floor, "...one, two THREE, one, two THREE..."
at December 27, 2012