The hiss in history 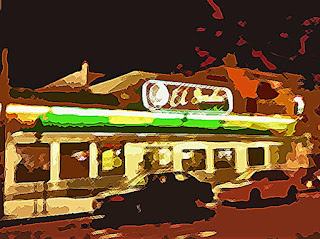 It's the desert and it's too damn hot and things about are still, motionless to the extent that you swear you can hear their atoms expand and produce a muted groan . There is a crackle to the things that move, an irritating grate when the rustle of clothes rubs against perspiring skin and seem to slather the salt of sweat deep into the pores. Everything is cast under a light you can't keep your eyes open for. It is the punishment for merely being alive . Howard Altmann creates this precise sense of the desert with his poem "Desert Sounds", a meditation, of a sort, on the inflamed emptiness that is the desert stretches where the imagination starts to notice the induced surrealism of what is close, torched and motionless.

The iguana is still under the rock.
Blossoms unfurl scents over coiled snakes.
Saguaros arm their shadows
With the long legs of daylight.
And whose limbs got buried where
The grand inquisitor unearths deeply.


So it goes in the Sonoran desert.
Sky shows its teeth with cacti.
The mouth of civilization spits out sand.
Who are we, who are we?The heart of the blue-throated hummingbird beats
Up to twelve hundred times a minute.

There is the lingering feeling that you're waiting for something to emerge, for some dramatic event to take over this scorching endurance contest and provide a relief to both the heat and the tedium. Yet it remains, ruthlessly itself and defying the metaphors a literate poet might want to transform the surroundings with. Altmann is skillful in his use of straight-forward language and in the spare, delicate construction of appropriate metaphors that work in a tight, sense-filling manner with closely observed images:  the sight of blossoms unfurling their scents over coiled snakes is doubly suggestive, sensuous and deadly , and works perfectly well without a literary trick to make them more compelling-- this reveals an subtle Imagist influence that considered extensive use of metaphor and simile wrong and even injurious to poetry's ability to offer a new way of viewing what is actually in the world about us.

Altmann is wise enough to realize the two things he has joined in a sentence are extraordinary on their own terms. When he does  offer a metaphor, it is  quick, neat, fast as the eye that perceives the image and the mind that is its witness, " Sky show its teeth with cacti". Not a profound image, that is, nothing that ransacks  author and reader memories of vaguely recollected disquisitions on metaphysics, but it has the mark of elegant simplicity. It is apt, it is direct, it enhances a perfect expression.
at July 14, 2012