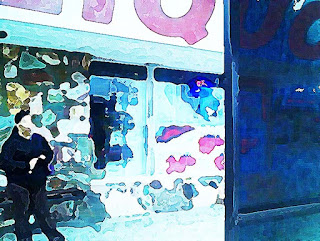 "Looking at this thing makes my neck hurt" Bonerface said, looking up

to the top of the Watertower he was standing under with his friends, a loose conferderation of high school buddies, musicians and other semi-employed types who were now in their early forties, years from their graduation date and year boo predictions, standing under a Watertower in the middle of a public park, a spot that had become a hang out for no other reason other than convience to homes and jobs , basic, bonehead familiarity, and the fact that few of these guys ever gave up the idea of being on some kind of cutting edge where street credibility was everything. Middle aged men with nothing else to do but wait out the duration of their drug of choice before they could go home, or to work, which ever they individually remembered they were in line for.

Bonerface rubbed is neck and took a long toke of a joint of skunk weed  that was being passed around. Ferg took the joint as he looked up as well, studying the underside of this huge Watertower, a large vat supported by six supporting legs that were as wide as small houses on chopped up lots of land. An ache developed in his neck, and staring at the criss-cross pattern of beams, joists and joints in a murky , rain-drenched dark made Ferg feel profoundly powerless in the center of his stomach. The earth seemed to move away from his feet;gravity seemed suspended. He passed the joint along without taking a hit and looked at Bonerface, who was now playing an invisible guitar. Fingers scurried along unseen frets, notes plucked out the air with a sound that came up from under the street, the mission of the muse to make this park electric, electric,

Bonerface sang something to ease the pain in his neck


"Nice power chords" said Grelb, a friend who actually finished a year of college who made a half a living selling record reviews to dozens of adult magazines , titty mags and fast beats, he liked to joke, "nice runs and scat shattering sonics there, and the chords come nicely placed, "BOMBgoddamnedBOMP, and that opens up the rest of the night, the stars above to a terrifying extreme of get down…"

"Good for the pain the neck" said Ferg.

"Whatever" said Grelb" because you know one of these days one of us is gonna get married, get a real job, or just die from so much hanging around doing nothing but living on little else but minimum wage and alcohol, and wher will that leave the rest of us, under this Watertower…."

"Beats the willies outta me" said Ferg, "You move on, I guess, you see better movies. Better yet, you become a movie yourself. You may still die at the end, but at least it's a death that means something, hokey though the moral may be…"

"You shoulda been a film critic" said Grelb, "you have a way of filling the air with sentences that evaporate quickly after sounding so pleasant after you said them…"

"Yeah" said Grelb, producing a bottle from the picnic table where the small felllowship did their weekend drinking. He handed it to Ferg.

"You need to stop looking up like that" Ferg muttered, "we been coming here since we graduated, off and on, and you still have to stare up at this thing the minute you take your first punch offa bomber?"

"Pussy" said Ferg, " call yourself a son of Irish pride? Go ahead , be sick…"
"Cut some slack, her, Ferg" said Bonerface, "it's not as if you haven't been the one broadcasting their lunch recently."

Ferg rubbed his jaw, reached into his pocked and fished out a smashed back of Camels. He took one out of the creased pack , jabbed it between his lips and lit it with the last dry match he had, cupping the flame as it seared the cigarette tip. The burning end glowed in the dark, highlighting the counters and lines of his palms. The smoke felt good as it seared his throat. A good burn, he thought, burn away this bullshit.
at June 28, 2012