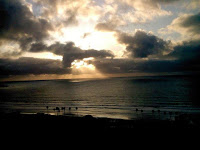 An ex-wife sat across from me in our studio apartment some years ago smoking a cigarette and staring at me over the rim of a half filled wine glass. I hated wine, preferring beer or scotch, and this put me in a bad mood indeed: my worst days had me thinking I was a Hemingway man and that acting genteel would demolish what little self-respect I accrued during our frolicking quarrel of a common law marriage. I told here that I liked movies , books and music to be "fun". She was,and remains, smarter than I am, and had her own idea about what art should and should not be. She extinguished the cigarette in an ashtray and took a sip of wine, saying clearly that she loved me until the mountans became a cottage cheese of indeterminate materials, but she was of the mind to think that my flaw was that I was continually confusing fun with artistry.
"Art" is massive set of aesthetic activities that accommodates a lot of agendas in its generalized practice, the practice of "having fun" not the least of them. "Fun" is that sense of something that engages and provokes in someway a facet of one's personality that makes up the personalized and skewed way that one understands how the world works in actual fact.

Whether Cage piano recitals, James Carter solos, Fassbinder film festivals, or whatever gamier, tackier sounds cleave to ones' pleasured ganglia, the quality of fun, that fleeting, momentary state that defines an activity, is why we're attracted to some kinds of music , and not others. It's a legitimate definition for an aesthetic response, but the problem comes in the description of the response, the articulate delineation of what made a set of sounds "fun".

The point, of course, being that everything that is entertaining or distracting from the morbid sameness of daily life cannot be said to be exclusively in the domain of the willfully dumb, conceived in a massive expression of bad faith: what is entertaining, from whatever niche in the culture you're inspecting, is that activity that holds you attention and engages you the degree that you respond to it fully. "Fun", in fewer words.
It’s late as I write this, and  I'm listening to "Rush Hour" by Joe Lovano, composed and conducted by Gunther Schuller. A handy group of orchestrated compositions--"Prelude to a Kiss" (Ellington), "Kathline Gray" (Ornette Coleman). Lovano's tenor saxophone work is supreme against the sweeping textures of Schullers' orchestrations: ensemble and soloist work as choice extremes over the moodscapes. There's an ethereal steam brewing amid the extended blues choruses, bop cascades and serial investigations. This is the kind of pure musical work I wish Zappa had more time for.
I am amazed at Lovanos' control over his technique and inspiration: he seems to draw a cool, fluctuating of bends and slurs from his horn: his ability to step inside the tradition and then step out of it again to entertain some grainier abstractions brings Wayne Shorter to mind. Not that one stops at the comparison, only that Shorter comes closest to doing what's evident in Lovanos' inventions.

Credit to Schuller: he project recovers nicely, I think, from his undifferentiated patchwork of "Epitaph", a troubled labor of love.
at March 10, 2012