Asbhery settles in for the long haul

Whether It Exists
by John Ashbery
All through the fifties and sixties the land tilted
Toward the bowl of life. Now life
Has moved in that direction.We taste the conviction Minus the rind, the pulp and the seeds.

It Goes down smoothly.

And the field became a shed in ways I no longer remember. Familiarly, but without tenderness, the sunset pours its Dance music on the (again) slanting barrens.The problems we were speaking of move up toward them. 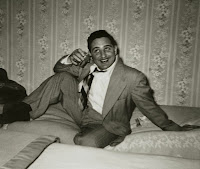 This may be the closet thing to straight-talk your likely to come across from a John Ashbery poem, a brief meditation on how emotional attachment to otherwise vivid memories wanes as you age. Yet even in it's brief two stanzas and spare outline, this poem manages to bring two signature Ashbery traits to its center, elusive but not aloof.It suggests that just as the planet is formed by forces of weather and natural occurrence, forces that exist precisely because the earth exists at all with innumerable ecosystems shaping its profile over a great many eons, we also come to be formed by the cumulative logic of our choices over time.

Where once youthful ego and naive philosophy gave us the surety that we were the captains of our own fate and were superbly equipped to navigate by invisible stars, we find ourselves with the slipping of years in cities, occupations and with hobbies formed by the life we thought we created from whole cloth. Man makes his tools, and then the tools make man. In Ashbery's poem, our enthusiasms have ceased to be passions, an animating force of character, and are now, wizened with years, tested by experiences great, tragic and mundane, a cluster of traits, inconsistent habits of mind that haven't a coherent center but rather a shambling direction; inclinations rather than agendas. The glory of planting one's flag on a patch of earth with it mind to transform that acre and the acres around into a kingdom that will bear your name on signs and in memory becomes a hallowed shape.

Not that we are required to remain hard wired in stubborn habits and soured romanticism in our old age; Ashbery is a poet who cannot help but remain engaged with the world that has usurped his youthful mandate. Even as days , weeks and months go by faster in old age, the poet views what was the soil which was his metaphor for self creation and brings something from decades of life; what was formerly merely raw material waiting to be formed by an aesthete is now filled with nuanced shades, tones, subtle rhythms in the closely details   of trees and their leaves, tall grass. The world again provides you with something to consider and absorb whenever you're finished tending the wounds of the ego that is recovering from a protracted disappointment.

At a later date I added color  And the field became a shed in ways I no longer remember. Familiarly, but without tenderness, the sunset pours its Dance music on the (again) slanting barrens. The problems we were speaking of move up toward them.