Edgar Guest and Marianne Moore: the task of the modernist poet 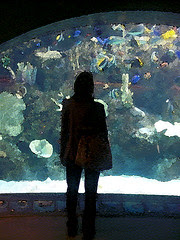 There's a smart,concise essay by Robert Pinsky contrasting the styles of poets Edgar Guest and Marianne Moore  in the current edition of Slate online. It is of value because he more or less isolates the reasons why no reads Guest these days, the poet who was once the most famous poet in America, and why the formerly obscure Moore continues to gain readers the many decades since her first publication.
Edgar Guest was not an incompetent writer, of course, but that does make him a good one. As with the faded phenomenon of Rod McKuen in the Sixties, Guest's singular ability was to take on a persona that reduced a great heap of cracker barrel wisdom, cliché and hick town wisdom into an attractive speaker who would seem to come along an endless string of life's events just after they happened and reveal the moral that only required a clear sighted commoner to brush the trail dust from.

By the time McKuen emerged during the Sixties a perhaps more poet archetype had filtered through mass culture and, abetted with the then current notion that rock-lyrics-were-poetry-- was able to take the idea of Poet as Tragically Solitary Romantic Hero and reduce it to appealingly two dimensional depiction of a Man Too Sensitive for Life's Many cruelties who was consigning himself to travels far and away, usually on boats , usually arriving at coastal cities in deepest mist to choruses of foghorns and sea gull cries. His universe , with all it's references to anonymous and genderless others in the form of the familiar sounding  yet effectively distancing pronoun "you", was solipsism with the worst social implication; although others in McKuen's imagined travels and romances are indeed present, although they have names and histories unique to them if one chose to investigate the sources of McKuen's muse, it is only McKuen's emotional state that matters. The essence of Hemingway's code --live by your own rules, do not impose your pains, wound and heartbreaks on to others , and seek experiences that are vital and apt to increase your appreciation of the Life You Have--is boiled down to a shriveled, grayish root . Where Hemingway's thinking was that one had to be prepared for others to follow their own consul as well and and summarily at conclusions and actions that are likely contrary to one's internalized philosophy, McKuen's premise is merely a set up for failure; the man's poetry leaves you with a feeling of unearned fatalism and acting out. This is a middle aged man writing as a sensitive teenager  who desires experiences his body has yet to know.  McKuen equates defeatism with the poetic spirit; Hemingway, in a manner of speaking, tried to show us how to take a punch and then get back into whatever game it is we've decided to take part in.This was perfect material for the teen ager who wanted to graduate from Bob Dylan records. The irony is that it is the lyrics of a songwriter that have survived the decades better than the generically defined page poetry of either Guest or McKuen.

Guest, it should be remarked, made a living cleverly rearranging, rephrasing, re- branding what it was his audience already believed in; there was nothing of surprise in his work, but rather a steady path toward a conspicuous set of resolutions. He was, in practice, a propagandist for the Way Things Ought to Be, a softly reactionary set of ideas that were not, in his writings, revealed as remarkable realizations as the result of following a string of contrary ideas to their metaphorical commonality, not a perception that is caught in composition and shared, indeed, his ideas are not even personal statements of any faith-based belief; they were, flat out, something akin to marching orders, talking points, instructions to a readership to take comfort in their reticence to challenge conventional wisdom , to resist straying from the compound, to be suspicious of education and nuance. Comic and technically skilled as Edgar Guest's pieces might have been his poems were by and large the disguised dictates of what Nietzsche referred to as "slave morality".

In essence, Guest is instructing his audience not to budge and to instead on a collective memory of a past that never quite existed, certainly not in the static , perfected, perfect balanced paradigm where a man,his family, his neighbors and the world about all of them existed in a common sense, "natural" harmony. He does this to nearly toxic degree with his homily "Home" , where the corniest of cornball American dialects informs the presumably willing readership a set of conditions , drawn from the baldest and least convincing of  stereotypes about rural life, that are required for a house for a house to gain the legitimizing and ennobling essence of being a "home". Pain, suffering , catastrophe are suggested as those things that make you part of an Order of Things that cannot be dismantled; new ideas, new technologies, new kinds of neighbors from different ethnic groups are not just suspect, they are wrong to be. Guest's hackneyed verse, filtered a meticulously contrived speech of common man wisdom, was contemptuous of modern ways, of being seemingly cut off at the root from a past that was, until then, continuous , coherent and seamless, generation to generation. There is something to be argued for  learning lessons through our own history as a people, but Guest turns into gummed up rhymes seeking easy places to land to launch a sinister agenda of mediocrity:


Ye've got t' sing an' dance fer years, ye've got t' romp an' play,
An' learn t' love the things ye have by usin' 'em each day;
Even the roses 'round the porch must blossom year by year
Afore they 'come a part o' ye, suggestin' someone dear
Who used t' love 'em long ago, an' trained 'em jes t' run
The way they do, so's they would get the early mornin' sun;
Ye've got t' love each brick an' stone from cellar up t' dome:
It takes a heap o' livin' in a house t' make it home.

Simply, Guest discouraged the impressionistic view of the world, detested the subjective, was annoyed to great extent at those poets who decided that their responsibility was not to their audience's need for walled-off security but rather to their own sensibilities as they sought to gauge the interaction of their personalities with the flux and flow of a world outside themselves, entirely separate from their wishes. Moore rather brilliantly had the quality of actual thought in her poems, and the best poems, such as her most famous "Poetry" or this poem "Silence", read as skillfully, artfully distilled notions, half thoughts, material items, memories that are tracked as they culminate into an eventual perception. Something other than what the writer wanted to see or say is revealed; the recollection of her father's speech about the virtues of short visits contrasted against his final offer of "make my house your inn" bring us neatly to Moore's terse knockout punch:" Inns are not a residences".

In the brief span she brings together a father's personality where he was at a remove from those he ought to be close to, that he would preface his desire to have little to with others with the flattering comparison with great poets and their stoic virtues, that he would open up his house to his daughter merely as a place to stay temporarily, not as a home. There is quite a bit here, voiced in simple language, linked implication, not rhetorical gestures. Where readers had read Guest, quickly understood what he had to offer and soon enough boxed up his volumes as attitudes in American culture began to change, Moore and others of her like remain the ones we can re-read and discuss without embarrassment .The best poems remain relevant, and it might be said here that a truly modernist work remains modern long, long after it first finds the light of day.
at October 07, 2011