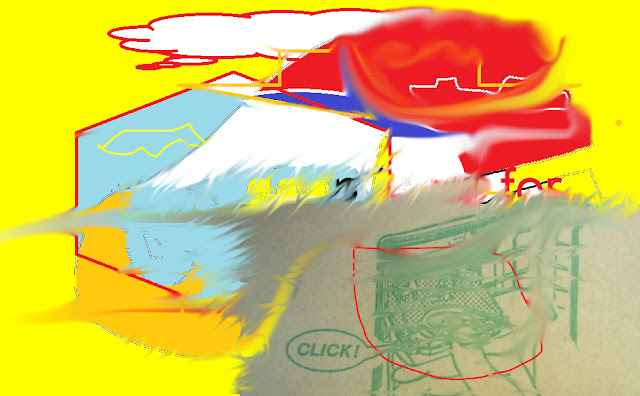 Mark Strand's  prose poem The Enigma of the Infinitesimal  shows us a poet who want us to consider those people we all have seen (as he claims) who have a purpose driven life consisting of one goal, to get to the nothing between the noisy and multiple somethings the rest of us have to navigate with purpose:

You’ve seen them at dusk, walking along the shore, seen them standing in doorways, leaning from windows, or straddling the slow moving edge of a shadow. Lovers of the in-between, they are neither here nor there, neither in nor out. Poor souls, they are driven to experience the impossible. Even at night, they lie in bed with one eye closed and the other open, hoping to catch the last second of consciousness and the first of sleep, to inhabit that no man’s land, that beautiful place, to behold as only a god might, the luminous conjunction of nothing and all.

It seems clear enough for me that Strand is talking the desire for a personal oblivion without having to do any of the heavy lifting, that is, he wants to witness the area between the crowded materialism of the earthly plain and the over lit expanse of whatever form of Heaven is in the collective thinking. I think what he means is that he notices his own concentration on the scant inches between things piled on one another, the remaining centimeters of space that still exist before leviathans, politics and economics crowded up the earth with a seamless babble concerning what's important. No business, no church, no politics to decide for you how to spend your time, your imagination; he wants a momentary respite somewhere that is not sleep nor death but still free of static and the overflow of voices and traffic sounds.
This , ironically, becomes something of a reason to live, to go on despite the horror of life's eternal drudgery; in a sense that seems very much like Samuel Beckett, these numinous creatures seek that space and that state that cannot be found nor reached even with the wildest imagination; all one can do is hatch new schemes, seek new cracks in the architecture, attempt to lose a little more of themselves in the details and the grain of existence in some wan hope that they might transcend the cluttered bounds of earth and witness the perfection of nothing there at all. It would be a kind of Heaven, unspoiled, unassigned, unreconstructed, not blemished a bit by any one's lisping conceit as to how the space is to be used, purposed, designed.
One might imagine that this  Death Wish defined, the desire for death institutionalized in our personal rituals, but what we have, I think, is Strand grabbing onto to something that Beckett surveyed so well ; the desire to live becomes, instead, the obsession to keep the ritual in order and the tedium in place; while the waking ego expounds a poetic urge to escape the mundane and to live in radical proximity to the sublime elegance of negative space, the body knows more than the spirit and maintains the grind one would other wise claim murders the soul. The soul flourishes, the body would say, because of the tedium, the grind, the unending repetition of habits we've filled the world with; without the tedium there would be only a life that is nasty , brutish and short. The same old same old is the foundation on which our hopes of deliverance rest; without it, there would be no yearning for impossible things.What the poem implies is not an envy for the otherly shadow people seeking that negative space between the brick and mortar, but rather a desire on Strand's part to achieve something like death so as to be relieved of the grind and grunt of daily life. He speaks of them in the third person, but the awareness of their routines and their desires is intimate, it has the lyric yearning of someone speaking from their own experience.

Even at night, they lie in bed with one eye closed and the other open, hoping to catch the last second of consciousness and the first of sleep, to inhabit that no man’s land, that beautiful place, to behold as only a god might, the luminous conjunction of nothing and all..

The "lovers of the in between" seek to "inhabit that no man’s land, that beautiful place..." which , to my mind, indicates an obvious desire for something permanent. Not death, but death like, as I mentioned before. "Oblivion" , "near death" and the like are synonyms for Mark Strand's concept of "...the luminous conjunction of nothing at all." Strand's desire is for a permanent condition, what some might consider a zen condition where the ego vanishes and there is only oneself and the very thingness of the world, unadorned by materialist clutter. Still others might equate the poem's yearning with Pink Floyd's song title "Comfortably Numb". The idea is closer, in my reading, with the poems , plays and novels of Samuel Beckett, who managed to extract a dynamic literature from the monotony of existence; as with Strand's reluctance to embrace death by name, Beckett's characters become obsessed with an irresistible urge to transcend their bounds and yet refuse to upset the stratification they claim is killing their spirit. These people Strand speaks of , meaning the poet himself, are pursuing what they know to be an impossible goal; that way means that nothing in their life has to change.

It's one thing to imagine a fictional abberation, a shadow person, lying in bed , still awake, but Strand's detail belongs to someone who them self has spent nights half awake , half dreaming of a perfect, painless oblivion. This is not a prose poem expressing envy of anyone; although he furnishes distance with by avoiding first person in the telling, this poem is a confession, a bittersweet gushing of an impossible dream that underlies all other motivations to get through another day.
at June 09, 2011