A poem by Jane Hirshfield 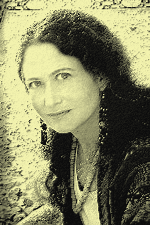 An interesting couple of poems appears in Slate by Jane Hirshfield, dealing with the inevitable experience of death, the long shadow that falls over all of us. The first, "Alzheimer's", is a harsh lyric, a superbly connected bit of detail that makes a connection with a troubling fact of life; it is a terrific example of how to concisely travel the distance from the abstract to the specific without sacrificing emotional power. That poem can here.

The question goes "what's eating you?", and , as we get older, shakier, less full of ourselves because there are fewer people who care what we think, or what we've done, a proper answer would seem to be that it is other people who've picked up on your accomplishments and done something more with them. Their inventions and bits of genius are not possible without the base you laid out. So one is a rug, bright, colorful, an intricate weave of detail, experience, improvisations and inspiration, that is chewed on from the margins; the center remains ,the design is visible, but it is tattered and gnawed upon, unable to collect itself to a former glory. The glory never returns.

A thing of beauty is a thing forever, as it goes in the Keatsian sense, but in this instance, the rug standing in as metaphor for a man's presumably long life, the idea of "forever" hinges on the title of Hirshfield's poem,"Alzheimer's". The beautiful man will be so long as there are people to remember him and exchange stories about him, marvel at old photographs, trade details on conversatins they've had with him.

"Forever", Hirshfield implies, is merely another way to refer to describe what the historical record is for the likes of us who do not move mountains , win wars, or save nations from destroying themselves; it merely describes a reprieve against the amnesia that over takes all of us after a loved one dies. The survivors themselves die, and their children have nothing of the friendships to their memory, only the archive of deeds and repeated wisdoms, now uttered as common place phrases in the commonly held idiom. There is a bitterness here, a realization that one has had their turn in the sun and that soon enough the misery of fading away will be done; what remains after the funeral, the books, the furniture, the inventions, the best of what one has done and said, will be distributed among a variety of networks, and what is deemed useful will be judged by an anonymous population that perhaps has no knowledge of who we might have been . Not the example of Keatsian joy. Hirshfield's succinctly debunks the idea that we live on in the memory of others. The lights dim and go out on everything, to the extent that all that actually remains is the detritus of our individual lives, recognized as incidental paraphenalia, to be judged and used by the young in ways of decoration, not honor.

It was suggested by someone that this poem contains an embedded irony in Hirshfield's remembering this dying man in this poem, immortalizing him, in effect. Or so it seems.Preserved in a poem, perhaps, but not really, as most poems that are written and published get a minuscule readership, and that most are not remembered after a short duration. Trust me, as bookseller I have had to clean out houses of a lifetime's reading, piling stacks of old poetry books written by poets with names known only to retired librarians and specialists in arcana. A beautiful poem is not a thing forever, in most respects--someone like Yeats is rare, rare, rare. Poems, their subjects, and their authors fade with time; they become forgotten. What remains is an anonyous residue.

What the old man says about not being the picture of "Keatsian joy" offers a clue to Hirshfield's probable realization that even a metaphorical immortalization in a poem is subject to the recollection of the collection memory. Somethings last longer through the decades better than others, but it is a fact that most poems and their poets are not remembered past their century. Those of us that write poems long to be Shakespeare , Pope or Donne for the sake of longevity, but most of realize, at a gut level, that notoriety in poetry, in content and authorship, is the least reliable way to get famous, or stay famous. I don't think Hirshfied is telling us something so sentimental as to declare that somehow one is remembered in a work of art; this poem has a harder core, but not a cold one. She merely acknowledges, I believe, the limits of memory, of reputation for most of us now walking the earth. Most of us will land in the history books, most of us will not have poems written about us, all of us need to appreciate the joy that does come our way and to not become angry when sorrow occurs , as it must.
at November 04, 2010