Notes on "The Corrections"

It's not a book I hate, but it is one that I'm tired of reader’s reference as a "masterpiece": The Corrections, by the currently over exposed Jonathan Franzen. It was a padded family tragi-comedy that would sit well next to John Cheever’s two Wapshot books and John Updike's quartet of Rabbit novels without embarrassment, but there is something worked over in the writing. 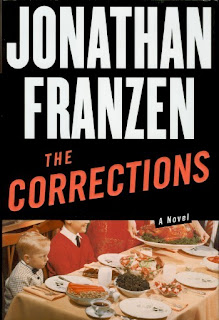 Franzen, for all his long, virtuoso sentences connecting the minutiae and detritus of this miserable family reunion into a readable prose, the shadow of William Gaddis and Thomas Pynchon loom over his shoulder; the paragraphs are rather too packed, too often, with every scrap he can remember to put in, and there is, fatally, that hint of delirium that made the both the Gaddis and Pynchon use of the insignificant so alluring. The Corrections falls short of the masterpiece its admirers want it to be because an editor wasn't brave enough or assertive enough, to force Franzen to downsize his landscape. It became a trod, and what might have been a powerful and painful comedy became instead a blunt and painful to endure. I suspected Franzen had somewhere in the writing crossed a line and had begun confessing a host of his own traumas , with other names attached to the recounted deeds and results; the novel has that seamless, unstoppable quality of a monologue professed by traumatized sole who keeps on naming names of those who've slighted him , regardless of the topic under discussion, who will only incidentally, mechanically distance themselves from the details with a passing qualification of "I'm just saying" , or "maybe I'm wrong". And yet the recounting continues, recollected again, and yet again when a new analog occurs, until your consciousness shuts down like a machine responding to symptoms of over heating.
I had read How to Be Alone a few years later, his memoir/ essay collection where he writes movingly of the passing of his parents and the clash of his youthful idealism becoming tempered by the undisclosed facts of Life; but the poignancy seemed a matter of effect, of a certain manipulation of the narrative points; his telling in the memoir read as if this were one of his novels. The bleakness was too literary for comfort; not that I think Franzen dressed up his own memories, but it occurs to me that he has made a decision to treat his life like it were bleak comedy whose last chapter had yet to be written. I understand this, somewhat. I used to wallow in my depressions and despairs and exaggerate the hurts and aches that befell me, knowing this gave me ample material to write about. I lucked out, however, as even I became bored with the style and tone I inflicted on countless pieces of typing paper. Franzen has lucked out as well; he managed to get paid.
at September 05, 2010