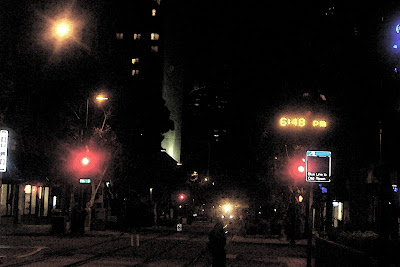 This seems to be more chatter than literature, more posing than poetry, seeming to be an appealing cross between Billy Collins and John Ashbery. I mention Collins because there is the inordinate concern from the author with his position among a set of everyday items he finds himself among, and Ashbery adds the spice of indecisiveness; the narrator's mention of a hard , tangible thing introduces a new thought.


That new thought circumvents a monologue on the previous set of particulars that might have been interrogated by the poet's wit, and so forth. Pocket, in essence, is an effective, if not so tidy metaphor for what a pocket actually contains--the wallet, the rubber bands, the loose coins and alien scraps of paper and mystery material, the lighters, the keys, the cell phones, the comb with the clumps of matted hair; all are things that have only one thing in common, a pocket they've been crammed into and retrieved from, an accident of unpurposed circumstance. Poets, however, are the culture's engines for meaning creation, making a connection through narrative invention the as-yet unperceived connections between things that otherwise haven't a relation other than location and ownership.


Zapruder approaches this subject not as a treatise on the pocket, but rather an impressionistic evocation of it being a negative space, a black hole of a kind, a place where stray things get crammed until a further determination is made, a fate that usually winds up being the loose change dish, the file cabinet, the desk drawer, or the trash can. This winds up being a clever, chatty analogy for human consciousness itself; our waking lives are operated as a place where experience is crammed , willy nilly, into an infinite closet where what we've done, tasted, gone is all stored in no discernible pattern but who's culminating weight eventually demands witness and explanation. Zapruder's bemused pocket philosopher begins to speak of and muse about pockets and their contents, but his attention is distracted to something else he his reminded of, a sight or a sensation of scant relation to his starting premise.


I like the word pocket. It sounds a little safely
dangerous. Like knowing you once
bought a headlamp in case the lights go out
in a catastrophe. You will put it on your head
and your hands will still be free. Or
standing in a forest and staring at a picture
in a plant book while eating scary looking wild flowers.
Saying pocket makes me feel potentially
but not yet busy. I am getting ready to have
important thoughts. I am thinking about my pocket.
Which has its own particular geology.
Maybe you know what I mean. I mean
I basically know what's in there and can even
list the items but also there are other bits
and pieces made of stuff that might not
even have a name. Only a scientist could figure
it out. And why would a scientist do that?
He or she should be curing brain diseases
or making sure that asteroid doesn't hit us.
Look out scientists! Today the unemployment rate
is 9.4%. I have no idea what that means.

I have no idea what that means, he says, and still he goes on to the point of exhaustion,  talking as the details of old thoughts and half memories occur to him; there is a Beckett-like element here, the need to speak and create in words the objects that no longer reflect the good graces of personality or resonate with one's history in a community. One's words, in essence, are bricks in a wall  against the yawning dread of being an anonymous cipher; in a way, this monologue is a way for one to announce that one has arrived, one has been here, one does not wish to be anonymous after decades of struggle and argument .What I enjoyed here is the notion is that the narrator is talking over himself, interrupting his own narrative. This is thinking unmoored and rudderless, without a sail in the stream of conscious. Where the focused writer excludes particular facts and associations on a subject and selects those materials that are germane to an argument that's already formed (or for which there is a formula one tries to follow), Zapruder's is stuck trying to talk about everything that comes to him before he fades himself; there is rather nice line at the end of the poem, of the black box beeping for attention at the bottom of the allegorical sea the airplane has crashed into.


some little of this work resembles the masterful associative drift of John Ashbery, but it would be another New York Poet, Frank O'Hara, that Zapruder has a closer kinship with. Like O'Hara, Zapruder's narrators are alert and lively in their being in the world; they share the same intention of responding to their experience as it unfolds. Zapruder,though, is more meditative, though, and figures less to form a a full fledged tale, as O'Hara was able to do, and instead produce a college effect , with elements both sublime, banal and even ridiculous finding a footing in the same sentences, a gesture made plausible by an internal punning. The names of things are parsed, the definitions are said aloud, something else comes to mind, a segue is created to keep the music going. There is an improvisational element in the poems, and and there is much to recommend to Zapruder's particular ear for assembling a nonlinear discourse with oddments that do not jar or clash without a satisfying effect. There is , I suppose, the need for some readers to demand conventional metrics, rhymes and devices as a means to have poems conform to a role of explaining or reaffirming an abstract and usually wistful notions of something Perfect and True behind the appearance of things.


The pocket, the consciousness, the deep and limitless sea, all repositories of things that are crammed, stored, secreted away under cramped covers, limitless lost things with stories that have stories we imagine that we're required to tell. Poetry, chief among our narrative methods, can only tell so much until we become part of the accumulated backlog . We cannot tell these stories quickly enough, we don't have enough time nor people to listen to what we've done and what we think about it all. And our cell phones are beeping, people calling with news they just have to share with us, this moment, right now.
at August 26, 2010