Iron Man 2 clanks on and on. 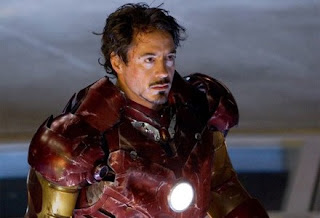 Iron Man 2 is out and more than ever I am seeing the Robert Downy Jr-Richard Dreyfus connection--both these actors cannot seem to leave a scene unchewed, a line unhammed with excess tics and twitches, both are completely incapable allowing a close up to be photographed without a smirk, a grimace, a tilt of the head, a believable tone of voice.

To paraphrase Duncan Shepard , both go about their business as if they had just sat on a cattle prod. That said,the follow up the brilliantly finessed first film tends too lag in the start, with a frankly tedious series of action/ fight scenes and a laborious origin story for Micky Rourke's Russian super villain. It is not a lean story line, as comic book narratives demand--we will make an exception for The Dark Knight--and spends equal amounts of time trying to gin up excitement for the forthcoming Avengers movies with a stalling segment with Nick Fury (curiously played by Sam Jackson).

The last forty minutes, though, tighten the slack pace , with chase scenes and nicely animated combat scenes bringing at least a video game excitement to an otherwise formless display. The voluptuous Scarlett Johansson has a good turn as an agent of the SHIELD agency; in a form fitting action outfit, she practices a sweet kung fu science against a troop of black clad henchmen. Her bad-girl is one of the truly good things in this oddly foot dragging action movie.

On the subject of super hero movies, it's remarkable how quickly people stopped talking about Kick Ass; it has less to do with the follow up release of Iron Man 2 than you might think; I would put with an audience boredom for the whole sub Tarantino irony-mongering as regards a movie reflecting upon it's own genre restrictions. The spectacle of an eleven year old hero named Hit Girl fatally bloodily stabbing, gashing, shooting and neck-breaking an army of henchmen --you wonder why villians keep employing ineffectual muscle-- is something offers something to challenge our moral expectations years beyond when such a thing would have created a fury of self-recrimination. It's that wild grab by someone who strives to out do someone they regard as a master--in this case, Matthew Vaughn tries to mimic Tarantino in the extreme as though wanting QT to pat him on the head and give him a gold star. It is deadening instead, providing yet another occasion for the perennially egregious Nick Cage to proffer another self-mesmerized performance. That he reads his line in a glacial cadence in obvious homage to television Batman Adam West only makes the the lethargy between fight scenes more apparent. This is like a long back seat car ride where the only thing you're looking forward to is the next rest stop.
at May 12, 2010