A half minute of doubt 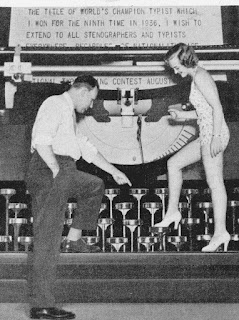 There are the times when, after bemoaning yet again a noted poet's latest poem-about-poetry and the attending self-admiration (or self-justification) , I am tempted to do my inventory and investigate the possibility that I've turned into a bored drudge for whom all the exciting things in the language have already haven't; I dread spending the rest of what I hope of are many years of life tossing soggy bombs at the poems that come from a younger generation of bards. I suppose it's a matter , partially,of the perennial search for a usable past--is there anything in the standards and tastes one  formed thirty years ago still workable in years where tastes and formulas have been modified to relevantly account for the alterations in the psychic landscape?   I am not against difficulty, I am not in favor of dumbing down poems in order to attract larger readerships, and I don't think the non-specialist reader insist, as a class, that poets have their wear as unadorned as sports writing. The gripe is against the poet who cannot get away from making Poetry their principle subject matter, by name. Not that each poem about poetry is, by default, wretched; there are bright and amazing reflexive verses indeed, but they are the exception to the rule, the rule being that a medium that ponders it's own form and techniques and ideological nuances too long becomes tediously generic.
The problem, it seems to me, is that some writers who haven't the experiences or materials to bring to draw from will wax on poetry and its slippery tones as a way of coming to an instant complexity. Rather than process a subject through whatever filters and tropes they choose to use and arrive at a complexity that embraces the tangible and the insoluble, one instead decides to study the sidewalk they're walking on rather on where it is they were going in the first place.
I rather love ambiguity, the indefinite, the oblique, the elusive, and I do think poetry can be ruthlessly extended in it's rhetorical configuration to encompass each poet's voice and unique experience; the complexity I like, though, has to be earned, which is to say that I would prefer poets engage the ambivalence and incongruities in a sphere recognizable as the world they live in. First there was the word, we might agree. But those words helped us construct a reality that has a reality of it’s own, and I am more attracted to the writer who has tired of spinning their self-reflexing tires and goes into that already-strange world and field test their language skills.
at April 12, 2010