ROCK AND ROLL MADE ME STUPID! 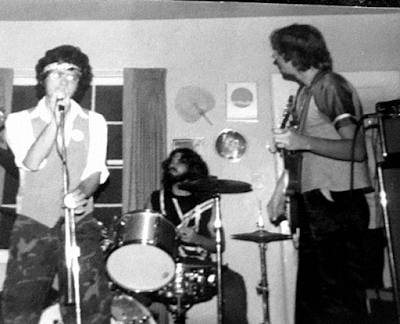 Like many another clueless air guitar rebel, I sang in a band during the Seventies, a strange assortment of druggies, layabouts, alkies and genius geeks who all loved hard rock. I was the singer, and the songs I sang ranged from Trower to Led Zep to Deep Purple to Mountain--I had a miserable voice but I was the one who could get a raspy tone and volume, so sang I did. No one seemed to mind, most likely because they were usually as drunk as I was. In any case, Dewar and Trower were the perfect combination of singer and guitarist--there likely hasn't been a collaboration this good since Rod Steward and Jeff Beck or Paul Rodgers and Paul Kossoff (in the late, great band Free). Trower, additionally, is about my favorite British blues guitarist--he broke the Clapton mold his fellows got snared by and developed his own sound; I think he's quite distinct from Hendrix, even with the similarities. I've seen him pass through town in the last few years, and the man plays better than he ever has. Yeah. Great stuff. The saddest day of my life , though, was when someone who'd recorded one of my band's kegger gigs played the the gig--we sounded awful. Even the time-honored honored rock and roll aesthetic the favors attitude over expertise, we we sucked,in turn, long, deep and hard.
A bag full of agitated electric razors would have sounded better than the clamour we were producing, out of tune, atonal,thumping, with a guitarist who was fried on cocaine and rum who managed to make his guitar sounded worse than car alarms screaming in a West Virginia mall. I , in turn, had the timbre that sounded, to be kind to myself, like someone who was clearing his throat over the loudest microphone on the stage. A crazed dog would have told me to shut the fuck up. I didn't stay quiet, though. The rhythm section , a bass player and drummer who wouldn't be out of place in a police line-up in Hooterville,  at best sounded like two winos having a knife fight under behind an abandoned coin laundry. We knew we were the shit.
That night we had a gig and what I did was to drink more and scream harder. My voice was gone the following morning and I could talk or eat shell fish for a month. But I pressed on, I continued, true believer in my own capacity as a post-blues revenge howler who could tear a hole in the ozone with one ball-squeezing shriek.I was in a band in the Seventies that played hard rock, butt rock so-called, and I was the singer, not that I could sing, but it's not as if any of us could really play either, save for a guitarist who had chops, no ambition, and a taste for coke. Everyone in the band is missing in action, including me , but the fact that my phone doesn’t ring with queries from these guys hasn’t diminished my life style. Between groping other guys girl friends, stealing drugs and records, and not paying back any of the borrowed money I promised to pay back in merely couple of days , it’s just as well that bad news that’s over thirty years old remain the pathetic history it has so far remained.Our song list:

There were hundreds of hours of rehearsal in a floating crap game of a scene, going from one band member's parents house to the other for what were really drinking parties. Things usually got destroyed, and sometimes we made it all the way through a song. We even played a few dozen times. I was drunk most of the time, so that I could scream the few words I actually knew to each song, somehow, truly, thinking that I was sounding just like Robert Plant or Paul Rodgers or Rod Stewart or any of my swaggering, macho strut heroes, only slightly aware that for all the half-skips sash-shaying I took for masculine intimations of heterosexual power were in fact very much a swanning display of featherless fan dancing. To the end of my time in front of the microphone, twisting my vocal cords into twisted knots of scraping rasps and glottal whispers, I was convinced my style was akin to the greatest belters blues and soul music gave to the white world for worship, Ray Charles, yes, Otis Redding, oh yes, Little Richard, fuck yes! It was small beer that I never knew what I sounded like, the grunts and groin splitting yelps buried under layers of un-tuned amplified guitar , farting bass lines and the endless thrash of a speed freak drummer .Someone once recorded one of our gigs on a reel to reel at a San Diego State Frat Party, and it was a gross, hell-bent, auto accident cacophony, fuzzy and sputtering with feed back and wrong notes and crowd noise and breaking glass: the noise hurt the inner ear: the MC5 without conviction. I was singing, all right, but I sounded like I had two wool socks crammed in my mouth, screaming in muffled horror while a serial killer approached me with a blade. I sounded drunk. The band sounded drunk. The decade was drunk.
at March 25, 2010

Email ThisBlogThis!Share to TwitterShare to FacebookShare to Pinterest
Labels: memoir, rock and roll