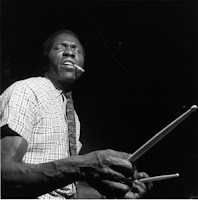 I remember reading in Rolling Stone in the early seventies of a drum battle between the late Elvin Jones and former Cream percussionist Ginger Baker. Baker, then touring and hyping his rather lead-footed big band Airforce, had taken to baiting Jones, the usual young gun sass about his elder being over the hill, slowing down. Long story short, and hazy on the details on my part, there was a concert with the two of them in New York, culminating in a drum battle between Jones and Baker. Baker had his post-Cream hardware, double bass, double toms, double snares, double everything, and Jones had his regular kit, simple and to the point. After some standard trade offs, you guessed it, Jones proceeded into rhythmic areas Baker couldn't follow him into: Baker received, to borrow from Howard Cosell describing a fighter just out-gloved by Ali, a drumming lesson. What Jones did on the drums was apparently beyond Bakers' nail hammering sensibility. It was one of those write ups that made me wish I was there.

____________________
"JC On The Set" by the James Carter Quartet, a stylistically wandering CD  but frequently fused effort from the saxophonist's. Nice reading of 'Sophisticated Lady'--Carter's phrases are sure and undulate with a blues cadence even as he extends his lines over a sublime melody. In other areas, he sounds tad brackish and barking-- blorts and grunts at times when he really didn't need them, as if to establish some kind of credibility that admirable technique alone cannot . He sometimes grates. Still, his work here is compelling for the most part,and Craig Taborns' piano work is a handy and deliciously quick-witted foil for Carter: elegantly, giddily fast up tempo, meditative and yearing as he scrolls over the ballads. Funky but chic.
_____________________________


Coltrane--tenor sax
Eric Dolphy--alto sax, bass clarinet
Ahmed Abdul-Malik--oud
McCoy Tyner--piano
Jimmy Garrison--bass
Reggie Workman--bass
Elvin Jones--drums.
From the four cd set, the first disc alone is mightily impressive for sheer stamina , and many sections of sublime improvisation. Jones rattles the traps in brisk rhythms, while Coltrane sets fires through out the side. There times when 'Trane gives in to his worse impulses--but these are brief enough, as Dolphys' alto playing, and his work with the bass clarinet is enough to make me almost believe that there is a heaven. What had seemed alien to mainstream, bop-preferring audiences as radical and un-jazz like at the time is now a given in the repertoire of younger improvisers, and there is not a musician today who can match  John Coltrane for the furious ingenuity that came from his soul by way of his instrument. Modal and operating on a rhythmic principle that  makes me think of W.C.Williams alluring yet elusive notion of the 'variable foot" of rhythm--cadences and stresses are constantly changing into nearly perfect accents based on the vocalizations of a words arranged in spontaneous combination that convey meaning and purpose in sound as well as strict definitions--Elvin Jones and Reggie Workman construct an ever evolving foundation , a brooding firmament on which 'Trane, Tyner  and Dolphy overlay a delicious and difficult weave of odd moods and desperate beauty. This is the kind of music that makes me think sometimes that I was born twenty years too late.
at March 17, 2010