Gail Mazur: a tourist at the Canyons of Your Mind 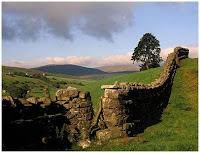 This seems a plain old case of someone falling into the mind/body divide, that time in any competent poet's career where they consider the intractable vagueness of the world their senses reveal to them, a cosmology tempered and flavored with the nuance of personal history and association, and the world as it is. Gail Mazur , with her poem "Figures in a Landscape", wandered too close to that precipice and falls straight to the bottomless bottom, perhaps stupefied by what amounts to the poem's punchline; our perception of a scene being beautiful and arranged in pleasing "natural" alignments are a frame we impose on the raw phenomenon, a meaning we assign it from our collective troves of useful metaphors and purposes. The scenery, though, is unmindful of our presence, has no use for our notions of beauty, harmony, or the disguised meanings our desperate symbolism creates. Nature merely is, constant, churning, violent in its cycles of destruction and creation. We are only elements among other elements, subject to the same conditions of survival and extinction as are forests, oceans, diminishing species. My principle concern here isn't the subject matter, relentlessly pursued as it has been and continues to be, but with Mazur's admittedly fine tone and style. Graceful and as carefully selected as her phrases are, something does not ring true:

We were made things, deftly assembled
but beginning to show wear—
you, muscular, sculptural,
and I was I, we were different, we had a story.
On good days we found comedy in that,
pratfalls and also great sadness.
Sun moved across the sky and lowered
until you, then I, were in shadow, bereft.

She describes the experience of what she witnesses from a distance,as if standing on a sidewalk and describing a store's displays through the display window, with some creative and overly acute details and glaringly "literary" words to shore up what the limited visage can furnish. This thinking, of making this phenomenological befuddlement make sense in a short verse, comes through a few stops along the familiar template, first with a not unexpected epiphany ("we were made things, deftly assembled..") that sets us up for the finalizing grand slam, that the scenery is real and not dependent on our scenario's to make them mean anything.

If no one looks at us, do we or don't we disappear?
The landscape would survive without us.
When you're in it, it's not landscape
any more than the horizon's a line you can stand on.

All well and good, I guess, but Mazur has belabored the obvious point that we cannot set aside our framing devices and see the world in-and-of-itself; as creatures of a culture through which we are compelled to achieve things with the knowledge of our own death, we need structure, continuity, community and the attendant virtues of purpose,love, unity of being. We create meanings that make the hardships worth the struggle; in short, we create of meaning-giving fictions to alleviate the constant dread that there is nothing beyond the biological imperative to eat, procreate, and die. Mazur , grace notes and all, reads more like a product tester's report. A brave face, perhaps, but this poem is territory others have been in as poets, with more interesting , intriguing revelations.

Would that more people read John Ashbery and ceased with demands that he make sense; the beauty of Ashbery's method of engaging the mind/body division is that immerses himself in, allowing his mind to navigate, with frequent brilliance, in the harbors and along the shorelines of Wallace Steven's world of Supreme Fiction. There are those stretches when the good Mr.Ashbery does not connect with an interesting line or a maddened mix of idiomatic and learned allusion--he does seem like he's treading water too often--but I more attracted to his willingness to explore the structures of the tropes he imposes on phenomena and the contingent wonder at how far his words fail to get to a mythical center of things. There is no "there", of course, but for Ashbery, if not Mazur, it's the journey that energizes the poems.
at February 04, 2010