NBC seems to be the F Troop of television networks, first allowing a prize like David Letterman to profitably embed himself over at CBS, and now all but destroying the luster that was formerly the Tonight Show with the contretemps regarding Jay Leno and Conan O'Brien. Of the two unfunniest comedian-talk hosts in history, the Peacock Network gets to keep the schmoozing Lantern of Obvious Punchlines Leno, while having to pay O'Brien a cool forty million dollars to take a hike. That's not a bad payday for someone who never improved his 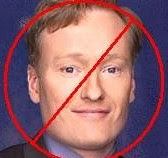 delivery, timing or punchlines in the decade plus he hosted Late Night; there was an unsettling, not endearing nervousness about the man's manner (as opposed to style) in front of an audience, and he always made think of the one funny friend you have who thinks he can be a comedian. Yes, you know the punchline, the night your friend signs up at local comedy club amateur night, he breaks out in flop sweat, his topics conflate with one another like unruly schools of fish, his tongue seems to swell, his twitchy delivery is one click away from a sobbing breakdown.

At his best, he seemed like he was rehearsing his ad libs in front of the bathroom mirror; at his worst he looked painfully ill-at-ease, often times casting a sidelong glance that made him appear like a rushing pedestrian trying to catch his profile in a store window. I would say good riddance, of course, but it's only a matter of time before Conan O'Brien sets up shot on another outlet, Fox most likely, and the likes of us looking for something to gaze upon while sleep descends on not quickly enough will have to rush past this over paid stiff's limp humor. To make matters less appealing, we'll have to pass the crusty walls of Lenoland on the way to catch Letterman's usually sprite monologue. One may avoid the whole ordeal, to be sure,by going to bed early; sleep has never seemed more attractive.
at January 19, 2010