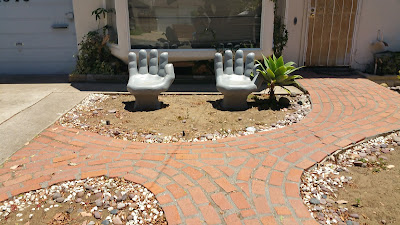 Charles Harper Webb's poem "Mummies to Burn" reminded me, perversely, of a cheesy 1973 science fiction movie, Soylent Green,, starring Charlton Heston, where we witnessed the tale of a resource-strapped, overpopulated civilization feeding the hungry masses with a mysterious synthetic foodstuff called, soylent green. The movie goes through its dirt cheap production clumsily, as I recall, until it comes to the payoff when the protagonist sees how the sausage is made. His last helpless cry to a hungry, unyielding mass, was that "SOYLENT GREEN IS PEOPLE!!!" It's gallows humor, I guess, worthy of William Burroughs or Philip K.Dick, where the State handles the overpopulation and food scarcity with a single, sinister, brilliant move; arrest an over enlarging group of an underclass no one would miss if they vanished without a trace, and feed the momentarily privileged with the compressed and processed energy bars made from the departed homeless. It was an ecology-themed science fiction film, made at a time when activist demanded a strong government hand in matters of overpopulation and hunger.

It was suggested to me that Webb seemed to be on a creaky anti-West riff, using the anecdote as reason enough to rehash a favorite harangue. There was a further suggestion that since the poem is a critique of Western technology strip-mining a culture for the sake of economic expansion, Webb wouldn't be inclined to criticize Egyptian history. Their record, it was asserted, wasn't Edenic and absent of cruel events. Had I came across the sentence that he had, I too would have been struck, surely, but the irony of the fact--white people converting human corpses into fossil fuel--and would have been motivated to write my own meditation on the severely negative side of Imperialism. His concern wasn't whether Egyptian history was noble or ignoble, but that European exploration into the area was intended not to learn but to discover exploitable resources. What he gets at, his intent and success, I think, is that the mentality is a pervasive attitude in the invading culture and that the psychology extends to a narrowly set pragmatism; short of coal and timber, need to save money.

Blimey, burn these bandaged cadavers, they're not doing any good just laying around as they are. The fault of Cameron's visually magnificent Avatar , is that it relies on tropes that are too obvious, especially on the Pocahontas / John Smith tale. Webb, on the other hand, is riffing on a historical fact and provides a provocative argument that it's not an isolated instance. I don't think he's anymore anti-West than, say, Jonathan Swift or, say, H.L.Mencken, two writers we praise for their critical eye and caustic wit, as well as their willingness to speak an unruly version of Truth to whatever gathered assemblage of thugs happen, at the moment, to constitute Power. You could say that Webb is a satirist in someway, a wiseacre, but whatever he is in spirit, he still notices how things that are said clash with things that are done, and that, like George Carlin, he has a willingness to push codified interpretations to the point where they become absurd. He is a poet, I think, who is keen on exposing contradictions and revealing the lies and embedded evasions we use to ease ourselves through the daily dose of cognitive dissonance.

The film had a paranoid take on government intervention in any social problems, and here posits, by way of Heston's flinty visage, a scenario where the State committed itself completely, with genocide and cannibalism being sane and logical methods to use in problems that have to a solution. A nice, if sick joke, on the whole idea of recycling. Webb's poem proceeds from the same metaphor, extending to the idea that a capitalized idea of progress has to not just break with the past in order to extend a civilization's reach, but must be willing to consume it by any means. The present is only a waiting period for that thing that really matters, the future; everything else is a merely a means of getting there.

The companies didn't think of kas whimpering, "Woe,"
when the bodies where they'd meant to spend eternity
dispersed into the desert wind. Nor did the companies care

how many children weren't conceived because workmen
pictured their wives among the desecrated dead—
how many woke, shuddering, at night, imagining

the gaping mouth; the yellow, glaring teeth;
the mummy stench.


Nothing else matters, indeed, and there is a lack of love, concern, interest in what has come before, the deeds and lives of generations who created families, communities, a sane commerce, a culture. Nor is there an interest in appreciating the time one is actually in; appreciating what one has, in the moment, in the time of one's time, is merely to stand still and fall apart. We get the language of this mindless drive toward an unreachable future perfectly, deftly, highlighting the early modernist fascination with the power and drive of machines that will shape the time not yet arrived like was a malleable material, an easily pliable clay.

Nor did the companies care

how many children weren't conceived because workmen
pictured their wives among the desecrated dead—
how many woke, shuddering, at night, imagining

the gaping mouth; the yellow, glaring teeth;
the mummy stench. Those were not days (except
in print) for tender sensibilities. Mobs howled

for hangings. Corpses cluttered the streets
in that time of White Man's Burden—of Drag
the Wogs to Western Ways, and Make Them Pay.

So to the flames the mummies went. Earth
spewed them forth, plentiful as passenger pigeons,
common as the cod that clogged Atlantic seas.

No fear the supply would ever end. No need
to save for tomorrow mummies abundant as air,
mummies good for turning water into steam

to drive the great iron trains that dragged
behind them, in an endless chain of black, shrieking cars,
the Modern Age.

Aptly, this describes a sort of gluttony where there is no hunger except for a need to feel that one is powerful and headed toward a destiny who's rightness will become clear at some undisclosed date. It's insanity, though, a rage to plough through, smash, grind, conquer, burn, smash, and otherwise both nature and the archive of human endeavor to the irrational sense of destiny that there is a greater world coming, a final stage of perfection that requires the severe, violent divorce from what's come before. Webb draws a fine string of images from this one historical tidbit, and makes an argument without the shrieking harangue of a less talented writer. His aim , I suppose, is to have us laugh, shudder, straighten our shoulders, and to be aware of the avarice toward nature and life that gave us our diminishing margins of comfort. From there, I think, some of his readers might decide to do something about it.
at June 14, 2017