First notes for the decade

Ron Silliman greeted the new year and the new decade with a reminder that we're living in interesting times and that the concerned should remember " there's no reason Sarah Palin, Lou Dobbs, Glenn Beck or even Ted Nugent could not become president." Some of those who responded poo-poo'd the notion and mildly chastised Silliman for seeming a shade paranoid. Those folks, after all, were cartoon characters. Ah, 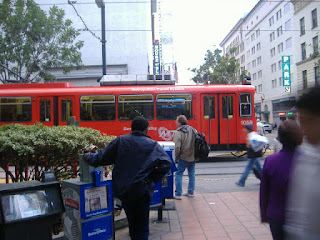 but the enemies of the common good love to be discounted; they are well aware that we love to be entertained while we have our hot buttons pushed, and that there far too many Americans with the right to vote who love nothing better than taking conspicuous buffoons seriously.We shouldn't dismiss the idea that Palin, Limbaugh , Beck or, choke, Ted Nugent can become President. The electorate twice elected GW Bush and a host of other fringe-clinging hard righters, a combination that has done the country no good favor.The GOP and the like understand how to work The Big Lie, and have shown a genius at manipulating a general discontent among voters, convincing them again and yet again to vote against their interest. We would do well not to dismiss the above list and stay hard at the fight. The thousands who've shown up at Tea Bag rallies convinces me that there's still a festering, hateful insanity out there; it is no longer at the fringe and has, in fact, metastasized to the center. The Right Wing Noise Machine is louder than it's ever been. We have to make noise of our own and take over the conversation.
_________________________________

Philanthropist Ruth Lilly has passed away, and there's an increase in the rumbling and grousing about the $100,000,000 endowment she gifted the Chicago-based Poetry Foundation with.It seems that if you want to kill an art form you truly love, give it's practitioners a lot of money to make sense out of. Poetry is such a fractured terrain in terms of techniques, schools, aesthetics and, shall we say, severe differences as to how to see life , that Ruth Lilly's gift was bound to create controversy and resentment; poets are picayune as it is with the meager resources available to them. I'm half way surprised that there hasn't been a blood letting over the funds.Still, I have to say that the Poetry Foundation were as deserving as anything in existence; I was fairly impressed by the fact that they never lowered their editorial standards by publishing one of Lilly's allegedly substandard submissions to Poetry Magazine. Whoring for an endowment they were not.
______________________________

I took a Facebook quiz that would tell me what famous film director I would be, and the answer, revealed after answer some insipid movie related multiple choice questions, was that I was Stanley Kubrick.I have never liked this man's movies. Impressive, yes, but for the most part I think he's all gesture, no story. He was more in love with the allegory than with the story the device was supposed to serve.I might add that Martin Scorsese shares many of the flaws with Kubrick, the bulk be of them preferring spectacle to a plausible and compelling narrative line. The difference, I think, is that Scorsese doesn't take a long time between pestering the world with his lack taste. The would have been one attribute from Kubrick he could have benefited both him and ourselves. I suspect there were nothing but superstar names in the roster of results the quiz created bothered to assemble; obvious choices, me thinks. Clint Eastwood, The Coen Brothers, Michael Mann, Alfred Hitchcock, Howard Hawks, Preston Sturges, Ridley Scott, Chris Nolan, Walter Hill, Sam Rami, Guillermo Del Torro, John Huston, Woody Allen, Wes Anderson, Jim Jarmasch, Quinten Tarantino, Sam Fuller, Don Siegel, now there are some names I wouldn't mind being my "inner director".
at January 01, 2010

Email ThisBlogThis!Share to TwitterShare to FacebookShare to Pinterest
Labels: miscellany