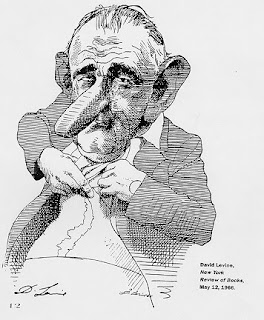 David Levine,very likey the most important caricaturists of the 20Th century, has passed away at the age of 83. Whether his target was Lyndon Johnson,Richard Nixon , Henry Kissinger or Bill Clinton, Levine took an unkind eye to the liars, scallywags and overachieving glory seekers who managed to make the world into a trash-strewn playpen. He showed them them not as extraordinary personalities but rather as chronic sufferers of delusion. Bad haircuts, unshaven jowls, necks that couldn't quite fit into the necks of their assigned shirts, Levine saw these power elitists as strange and difficult creatures who looked and sounded sane , but who seemed malformed and amoral on closer inspection. His acid-etched pen and inks were long a tonic in the middle of many a meandering political controversy,and one wonders where such clarity and moral outrage might come from next. Let's hope we get luck.
at December 29, 2009