I'm not a fan of either poet, but of Pound intrigues especially me . His fabled difficulty seems more willful than inspired , more determined than originating from a flash of an idea that would spark a firestorm in how poetry is read. His theories, his proclamations as to the duty of the writer to lead the race to a higher standard of perception, were the writings that galvanized and polarized a generation or so of writers who followed or argued with his lead; his poems, though, were stuck in an abstruse inertia. This is distinct from abstract, a quality where there is an actual idea being deployed and which, in turn, can be parsed by a reader with due diligence. There is no argument with how important Pound is to the reformation of literature and advancing the Modernist aesthetic, but some one who was so obsessed, in theory, 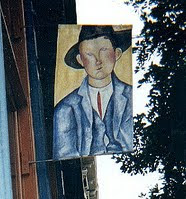 with reconfiguring language arts so that a new generation of readers can have fresh perceptions of reality and discover means with which to change it, Pound seemed seduced by the legend he was making for himself and delved headlong into his admixture of projects without a sense of how his materials and sources would come to make a generalized sense of themselves.

It seems obvious to me that he reveled in the difficulty of his work. His innovations as poet, for me, are worth studying in line with his critical pieces, but beyond their importance in establishing a time line, the language , the style, the attitude has not traveled well through the decades. He seemed like the brilliant critic and tireless promoter of new talent who put himself in competition with his fellows, IE Joyce, Yeats, Eliot, Stevens, Williams, et al. Pound believed art was the process through which a substitute priesthood of painters and poets can perceive the world, and it was the artist who could correctly provide the inspiration and spiritual means to change the way reality was constructed and lived in. He was attracted to strong leaders with pronounced visions of a Better Future, was attracted to the notion of violently blowing up the artifacts of the past in order to forge a new order from the ground up, and it was apparent to everyone that he aligned himself with such leaders. He desired to be considered among the scarce select who would show the way to the new dawn, whether they wanted to or not. Pound was fascinated by chaos, turbulence, severe intrusions of alien forms usurping dictions and definitions of older ideological husks and having them be transformed to some strange array of notions that are a vision of a Future not all of us will be able to live in. Frost , although over- estimated, is an acceptable minor poet and a canny careerist, neither of which are offensive to anyone who understands the need to make a living. He was content to be a passive witness to the state of things built by hand running down, subsuming a cynicism in a lyric version of sparely detailed plain-talk that could, at times,produce a stunning insight into the feeling of how the body aches as it ages.