Flanders in the dark 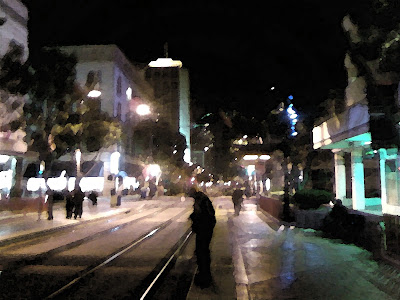 Night never seemed the time to get sentimental about the way the world never becoming what it was you wanted it to be when you were young, so thought Flanders, but this night, this very night, the lights on the wet streets making slurred rainbows and hissing sounds as the tires rolled over the pot holes in the asphalt, he thought, why not, this night of endless dreaming when there is only he and his cigarettes, the bottle of hooch in his back pocket, the clubs along the avenue up to the old water tower where he’d been in trouble on nights like this years earlier, earlier, faster as the rush of speed hit the brain and the tongue swelled and dried as ideas and impulse came into their own just then, this night of cigarette smoke in is lungs, a dry and parched pinch of burning charcoal filtered blackness that roasted the pink design of nature’s idea of breathing, Flanders took a drink, he wanted to talk he fingered his change and lounged against the wall of the door way he was in, cracking his knuckles, rattling the coins in his pocket, thinking he’d love a blues jam to break out in front of him right now, a long and searing guitar solo ala Alvin Lee or Johnny Winter, none of this po’ sharecroppin’ Negro shit where the notes were all wrong, the coarseness of the singing too beat up, chafed, scuffed up , none of that at all, he wished it would rain, he thinks that would help the way he isn’t feeling about this world and how it never comes around to his way of thinking, anyone’s thinking when there was a time for him to be alert enough to ask someone, why couldn’t he just drink like the other guys, just be like the other guys, just drink and sit in a bar and smoke the cigarettes, endless butts crammed in an ashtray, get drunk, pick up on some swing shift cootie cutie and fuck his brains out, be in some place warm, worn out, fucked up, fucked and asleep, oh yeah, not outside on a rainy night, looking at the traffic, all his teeth grinding something fierce, molars going like trains passing each other in mountain towns where the coal and the axel grease comes from, to the shelves of California, Flanders took a drag off his smoke and felt his back pocket for the bottle, wanting to slow down, the cars came to the intersection and just roared by when the lights changed, when the lights changed, the cars just roared by, big radio speakers cracking the promise of dawn and early returns of bus lines up and at ‘em and really alert to the cause of what the fuck am I doing here, oh pleaseeeeeeeeeeesssee man oh god in heaven this is such a bad bad badddddddddddd buzz, fucking A man, bad bad bad, Flanders was awake enough for an invading battalion, the white crosses had him marching, ready for anything, just alert, nothing moving but notions about what he might have done in former times, the chances he passed up , the chances, man that guitar solo smoked!!! I went down to the cross road, to hack a ride , oh yeah..
at December 11, 2009