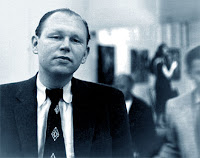 Ron Silliman commemorated the 9/11 anniversary on his blog yesterday with a gruesome photograph of ground zero with two poems by Jack Spicer superimposed over the carnage. It understandably caused a minor tempest among a few readers who thought we'd had enough fetishism over the attack , and that it was a use of Spicer's work the late poet might not have approved of. I thought it fine and appropriate; Spicer equated God with a Big Radio, and seemed taken with the idea of a poet's inspiration being transmissions from far off places, old voices of dead poets in turn who find their metaphors turned into apt descriptions of current circumstances.

By the time the hidden essence, the secret nuance of what a poet was talking about catches with a culture's experience, their original intent, while interesting, is not relevant as to how their words make our lives comprehensible, even if only on a visceral level. You could argue that the correlative intimations older poems have on the range of contemporary events is coincidental irony, but there is a saturation point when the lines, intended for what's implied , hushed and only vaguely graspable on specific subject matter, become instead the needed at-hand phrases that get the ideas that elude you when tragedies or windfalls of good fortune intervene on the come-and-go.


The poet loses control of what his poet is supposed to mean as history adds associations to the syntactical skin. Spicer, I suspect, might well object to the use, but there is a savage bluntness about poets and their varied attempts to find a greater resonance from the obscenity of violence that resonates loudly with what we're remembering today. What Spicer intended is a moot point, and in this instance, inconsequential. Today was the day everything changed, as they overused phrase went, and that meant everyone had to take a hard look at who they were, who they said they were, and why that mattered in the face of such insane destruction. Spicer, not the least, likely would have considered long and hard; there is the notion that what you've said in a situation you want to clarify gets repeated against seemingly opposing backgrounds. The voices from out of the air, from the radio of memory, are triggered by extraordinary events that transform our regualar which, after all, are not static in any sense. Silliman's collage is an inspired combination of histories; they are no longer mutually exclusive.
at September 12, 2009