"Seraphine": It's how you make it long 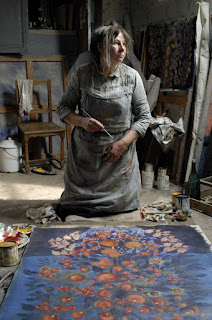 For a time after my UCSD years, I was a bit of a film dilettante , and felt cheated if a film was a merely ninety minutes long; I equated length with seriousness of intent and integrity , the way some people consider thick novels to be necessarily better than shorter ones. Getting older makes one discerning about what they’re willing to sit through and put up with, for many reasons, but for me it comes down to not having the patience to wait for a film to start to work. Time adjusted my aesthetics with my attention span.

I liked Seraphine formally—the director Martin Provost did a fine job with his composition, and suggested a period in war time convincingly without turning this thing into a turgid, Scorsese-inflected costume drama, and it was a well down outlay of who this woman was, what her world was like, both private and public, and I was impressed with the way the artist’s process was incorporated into the narrative. Her mania to please her guardian angels, endearingly played by the reticent presence of actress Yolanda Moreau, was an intriguing back story to the obsessive art making, from the way she gathered her materials for her paints, the preparation of her pigments, and then the actual painting , with her fingers, on the floor, as if she were wrestling with a large vision that was resisting being captured on canvas.

But it was long, very long, too long, and I found myself, like you, perhaps, getting a little antsy; maybe I’ve been seduced by the brutal efficiency and convenience of Hollywood narrative style, but I wanted the pace to pick up. It’s interesting that a director like Clint Eastwood has made a number of movies that one would consider slow-moving—Mystic River, Letters from Iwo Jima –but not consider glacial in the time it takes to watch them all the way through. The difference, I suppose, is that Eastwood , an admirer of European film making no less than any of us in the audience, remembers the best that Hollywood has taught him and remembered that movies are things that move. There’s always something going on, some bit of dialogue and visual cue that sets you for some satisfying dramatic complications. Eastwood, I suppose, would be a film maker who has wed a French eye for the small detail, the love of incidental things that make up a world he’s exploring, with the emotional impact of his masters, John Ford and John Houston. Provost, who’s work I’m not wholly familiar with, and tended to wear me out after a while. Lovely images, of course—I liked the final image of Seraphine hauling the chair out to the large tree so that she can be in environment that can enable her to find some psychic peace—but I wanted less of her and more of the others. Eastwood is amazing because he has an instinct in setting up dramatic contrasts, two strong minded characters having to clash, negotiate, argue, battle, make peace in dramatically plausible contexts. I wanted more about the critic and his world, his attempts to sell Seraphine’s paintings and the circumstances, cultural, social, economic, political , as to why she never ascended to the ranks of Picasso or Rousseau.

The story needed to move beyond being solely about the title character and develop the lives and worlds of the people who interacted with her. The movie’s flaw is that the poor cleaning woman is the only one who is given any kind of complexity, a fact that allows the movie to remain in place, static. An interest in another character or two , with personalities amounting to more than the brief significations of the dialogue, likely would have given this beautifully mounted project a brisker tempo.
at August 05, 2009