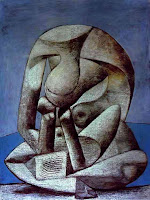 The lasting pleasure of owning a literature degree isn't, often time and sadly enough, financial, but emotional, spiritual, satisfactions achieved in the late hours or those morning commutes to work when you find yourself doing an extraordinary thing.One can feel intelligent for a moment without having to look over their shoulder to see if someone smarter is frowning at a conspicuous display of vanity. You're still talking to the novels you read and re-read years before, still interrogating the author for inconsistencies of style, chastising characters for lacking hindsight or being intuitively dumb. For a moment, you have your own version of the Borgesian library, but in this scenario the shelves are in your head and the books are an apartment building,not an institutional structure. So sometimes a strange smirk comes over my face on various bus routes. Odd, yes, but imagine thinking of something that you think is clever and having no one nearby to share it with. All you can do is smirk, take in a deep breath, bring the book back to eye level.
**
I have generally enjoyed and admired the Hemingway I've read, and I think the short stories in In Our Time are among the best by an American author in the 20th Century. That said, The Sun Also Rises was amazing and To Have and to Have Not equally so. THAHN, in my view a perfect example of Hemingway's skill at creating a visceral feeling of unspoken emotion, events and actions in a brief, concentrated syntax, contains another pleasure that contrasts with his signature brusqueness. In the center of the book, the story leaves the protagonist's plight for a time and takes the reader on a tour of the Marina, where a series of long, carpenter-crafted clauses seems to skim along the surface of the water and explore, in passing, a number of the boats docked there, wonderfully and credibly making the reality of this short novel more complex . You hardly know your reading a sentence that's untypical of Hemingway, ie long, until your done. The irony , one realizes, is that the master of the short sentence went for the long line as the best method to expand the social range of his novel without adding reams of undigested research, a malady that plagued the prolix James Michener his entire career.
At his best, Hemingway really could convey large emotions and subtle movements of mood with very few words. It was a reverse virtuosity that couldn't sustain itself, though, and left him with nothing but self parodied the more he was unwilling to change his style. Old Man in the Sea, among others, are relentlessly dull and full of the kind of self-pity that makes you want to smack him. Hemingway may have fallen short of the self-actualization, but his fictive attempts, at best, resonate and move, and achieve transcendence even when he did not. Perhaps it is a male thing, that these are matters that a reader might have to be intimate with in order to enlarge their appreciation of the work, but I think not. More, I think, it comes to personal taste, as in, if one does not care for the way Hemingway described his universe, fine. But I don't believe the ability to relate emotionally to a text need be restricted to gender, nor should it be limited to any other smoking gun criteria.The college professors who instructed me through his work were men and women, and the women, I have to say, win for inspired lectures, wedding appreciation with critique, understanding the poetry of the struggle, and why the struggle was futile. It would be good to note that in the course of the struggle to rise above one's demons through art, a good amount of good story telling was left for us to enjoy. I wish, at times, Hemingway had found some solace and continued to write stories that reflected a sane, balanced personality. But I am glad for the best of what's been left.
**

Prospecting for insight through Kerouacs' journals will be give scholars reason to devastate another section of prime forest, but his novels remain , inspite of it all, maddeningly inconsistent in their best forms, and progressively unreadable in later writing years. Kerouac had his moments of divine lyricism, I admit, but the cult around his grey, sotted visage is nearly as objectionable as the devotion many give to Ayn Rand: the matter is not how good the writing was, but what the author stood for. Once the chatter about writers drifts, or jumps desperately, from concerns with style in the service of great storytelling and lands in the odious camp that insists that a writers' primary task is only to reaffirm a readers' shaky self image of being a rugged and forward thinking individualist, I reach for a good book, or ponder taking a nap. Either option is more fruitful, and both are more interesting endeavors. It galls me that comparatively little attention was given to the passing of William Burroughs, the one true genius of the Beat group, while the easily assimilated rebellion of Ginsberg and Kerouac claims the top half of the Literary pages.

**
Purple America by Rick Moody was a novel that enraged me. He's been compared to one of my favorites, John Cheever, by many well-meaning critics, but rather than a young writer taking some cues from Cheever's careful and lightly applied poetry and sentiment as regards infidelity, alcoholism, insanity and lurking bi-sexuality, Moody is as effusive as busted water main. All of the previously described elements are there, but without Cheever's wit, irony or craft. None of his grace , either. Moody is one of these young novelists who is in a hurry to cram the world into each paragraph, with the goal being not to persuade the reader to go along with a story but rather to make the telling as intense as possible. This is the kind of ham handed narrative style that is a prose equivalent of an Oliver Stone movie, the uneasy work of a artist obsessed with keeping their "edge". Moody may have kept his edge, suggested by the jittery run-on disasters this rag of a novel lays out, but it's nothing worth sitting down for. Purple America, though, is worth throwing away.
at August 09, 2009