Moonfire: an insult to Mailer 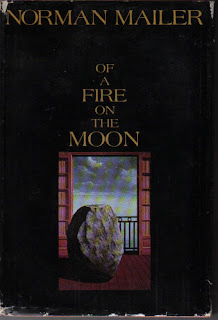 Taschen Books has published a Moon Landing commemorative "Moonfire", a very over sized and sinfully expensive limited publication that makes use of the writing of Norman Mailer.The Taschen stunt-publication of this edition is an insult to Mailer, really, as it cannibalizes what was likely the one true masterpiece about the moon landing, >"Of a Fire on the Moon", for an expensive gimmick that is inaccessible to most readers who'd otherwise benefit.

Besides being the result of prodigious research and reporting, the book was an insightful essay as to the role and the fate of the artist in the face of new technology that has usurped the Romantic notion that truth can be revealed through intuition and imagination. The sin is compounded by keeping "Of a Fire on the Moon" out of print, which irritates me endlessly; a major American author's best nonfiction book unavailable to the public Mailer, arch romantic himself , wrote about this through out a number of his essays and journalism, that what we consider as qualities that make humans unique are fated to be regarded as passe and dangerous, as the massive accomplishments of technology demystify the universe entirely and leave the artist , the poet, the novelist irrelevant artifacts. Irony has no limits, we find, with the Taschen volume, who have used the available machinery of contemporary publishing to produce bulky, expensive volumes that are less books and more engineering feats.

Mailer's fine work about the moon shot and the social consequences upon the artist for decades to come , intended for the idealized general reader, are made into mere elements of a pricey elitist vanity. It's an obscenity
at August 26, 2009