LOUISE GLUCK: Dancing with The Drone 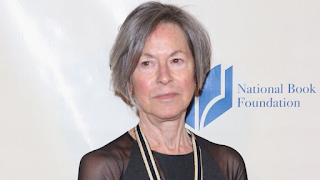 There's a poignant moment somewhere in At The Dance, but Louis Gluck's drifting, shapeless, monotonic style effectively obscures it. She is an outstanding example of the sort of poet who has charmed the chronically introverted and other over-thinkers who love to think they have a rich interior life but who can't really make it of any use; rather than measure among the experiences she's had and decide what carries the most weight and value. We are handed , over and over, a series of lumpy reminiscences that resemble a long gaze into a an unkept house; nothing gets thrown away , every item has equal value, and the narrative , such as it is, lacks any animation. Gluck loves to talk, but is hesitant, it seems, to create a hierarchy of signifiers that would create a momentum toward what she wanted us to assume was an inevitable irony. This is a droning piece, and what ought to have been a cleverly constructed series of parallels between the the protocols of dance, the rituals of attraction and the surrendering and reacquisition of power in interpersonal relationships is static instead, at best the the static-like rip of Velcro jacket being slowly pulled open.

By smell, by feel—a man would approach a woman, ask her to dance, but what it meant was will you let me touch you, and the woman could say many things, ask me later, she could say, ask me again. Or she could say no, and turn away, as though if nothing but you happened that night you still weren't enough, or she could say yes, I'd love to dance which meant yes, I want to be touched.

Some readers may find the seemingly un-ruddered drift of Gluck's poem appealing and opine that the spread of daily speech is in itself fascinating, and others would prefer that the writer remember that poetry is writing , distinct from speech, and that the power of daily speech would lay in how well the elements are selected, presented, given voice and cadence. Gluck , to my ears, is attempting an imagined transcription of a spontaneous utterance ; the effectiveness of something so literal is best spoken, I suppose, but here, sans sound facial expression, hand gestures, the pauses, rises and diminutions of the voice actual heard , I find the poem to be dormant. It does not move toward some crystallized set of particulars that memorably frame the exposition. In the area of prose poems detailing an author's bringing a past event into an at least temporary relief, I prefer Dorrianne Laux's poem How It Will Happen, When. Her tone is more engaged with the specific images that arise from her rummaging through her recent history--she shows an intimacy in the descriptions only the long view can provide, and yet holds back revealing the final mood as she constructs this poem neatly between the mess her mate left her to deal with, the ritual cleaning the house and the burning of all traces of what would remind her of a memory that would other wise shackle her, and the fast, unexpected revelation that what was an intellectualized acceptance of loss now hits her hard and without relief; triggered by a random occurence, she knows her mate is gone and not coming back, and this creates empathy within the reader. It's a poem of felt experience, and what I appreciate in Laux is her craft, which we do not see on the page. This has the power Gluck doubtlessly attempted in her poem. One might call this a poem of awakening, when young women discover what they are attracted to and that they , in turn, are attracting the attention of young men, and it's here where I think Gluck missed her opportunity to present us with something effective and delicately presented, which is the potentially metaphorical structure of dance It's not just that young women come to understand that they have attractions and are attractive in turn, but also a sense of empowerment; one finds themselves in a mysterious position of both drawing attention to themselves by simply being , and there is a gathering feeling that one might also control the elements about them with various, nascent rituals of beckoning and denial. She draws away, but does not flee the situation, she looks down, but does not leave his side, she watches where his hands touch her body and flinches at a sudden brush or attempted caress, but does not reprimand, lecture, become angry or afraid.
This seems a dance no less than the location the title suggests, and what really dilutes the power these burgeoning emotions and impulses might have contained is the way Gluck , or her narrator -stand-in, goes on with a what comes to a dead pan recounting of the facts; her poetry, perhaps, was supposed to emerge from the tone, but I would have been interested in something more closely observed, with something more about the interactions between the young women and young men, the camps coming into the hall in various clusters and cliques, where they chose to stand, some snippets of overheard dialogue, the eventual pairing off and awkward exchange of exploratory small talk. This sounds more plotted than the monologue Gluck offers us, but it is a way this poem might have come alive with a sense of place rather than become what it remains, a routine , uninflected regret. Gluck sums up of the scenario in a quick application of the story's moral, a conspicuous working of the old saw that when a women means no, she really means yes. Something wonderfully twisted here might have emerged if she had hacked away at the talky qualifications around the poem's main points and pushed harder toward the edge, talking about how women and men cause hurt and are hurt in turn by misreadings of intent and gesture.
What Gluck had here was a small poem, a minor sigh of regret in later life, the impression that strikes you when you're preparing for the day in front of you , or when you stop to catch your day. It is a slight insight into what had done in the awkwardness of maturing, but the scale of this thing, not epic length, not Ashberyesque in density , is, all the same, too much for this slight conceit. What might have been intriguing would be a juxtaposition of the narrator's current situation and the anecdote she's chosen, with a judicious use of the telling detail, the image that can stand alone, unadorned , which could contrast with an equally effective image . This is how one produces resonance that carry on beyond the page, and this is among the things that distinguishes poetry from the linear inclinations of typical prose. This is typical prose that requires an editor's blue pencil.
at August 12, 2009