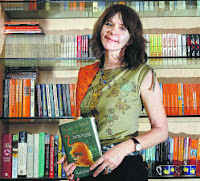 Ruth Padel quits an esteemed Chair at Oxford for some dirty tricks she performs against a rival, Nobel Prize Winner Derek Walcott. What learn again what we already knew, the gods have clay feet.


I'm not surprised reading about the shenanigans among the tenured poets at Oxford, since even on their best days poets do not advance beyond the level of being human and humans, we all know, have basic instincts they, at times, act upon ill-advisedly using. What is surprising is how stupid these folks are in our era of digital communication, in which virtually everything one has written or said is retrievable through a few well-targeted clicks through the Google search engine. It is , perhaps, that these folks, dually gifted and cursed to make language do extraordinary things, have applied their toddler -like desires with the rhetoric of good intentions or higher purposes.

Walcott, through one account I've read, seemed like he was attempting to convince one female student in his class that making love with him would be the perfecting of the epiphany he was attempting to help her achieve. The student rebuffed and Walcott, the esteemed (and over-valued) Nobel Prize winner acted venally by giving her a "C" for her course work. Padel, of course, wanted the position she and Walcott were in contention for and sent off her emails to the press, citing , in her remarks regarding her resignation, that she was acting upon student concerns regarding Walcott's lecherous extracurriculars. No one was buying it, of course, and the matter was clear--what had been a squalid matter of a professor's alleged sexual misconduct became even more squalid by a rival's attempt to take advantage of the mess. Her action is even more loathsome for the fact that the indiscretions Walcott is reported to have had are not recent but many years ago, one in 1982, the other in 1992. Padel's self seeking reveals her to have the instincts of the village gossip, wallowing in rumor and innuendo for their own advancement.

The tragedy, picayune as it is, is that becomes virtually impossible to regard these writers for the artistry and scholarship that made their reputations--one can only think of them as pathetic , ego-driven characters who's respective levels of brilliance did not deliver them from goonish behavior. It's comic, really, to see writers of god like abilities with the language act like weasels when it comes to their crotches and their careers. It might be a good thing that professional poets be made to stand in the corner along with the shamed presidents, deposed kings and celebrity screw ups who've relinquished their right to be taken seriously.
at May 27, 2009