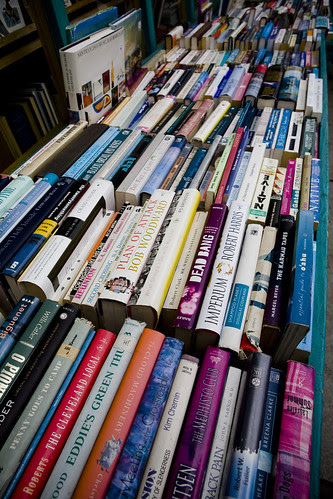 Ron Silliman kindly provides his readers with a frequent list of links to other blogs and online publications that he's found interesting, and part of his dutiful attention is dedicated to bringing us the unfolding stories involved in the demise of independent bookstores. Resilient as these venues are, they seem caught in an inevitable movement of cultural shift-- bookstores are no longer the community centers one would go to purchase books and in turn have purchase in the larger discussion that strengthens a democracy. On line purchases are just cheaper, and in the change of national habit , customers are willing to wait so they can recieve a discount. This is a tide that threatens to swamp the big stores too, with Borders and Barnes and Nobel struggling to keep their cash registers humming. Last week I walked into the downtown Borders in San Diego and wondered if I'd walked into an oversized living room; the cash registers were idle much of the time, but the store was full, seemingly peopled by freeloaders sitting in chairs with stacks of books piled at their feet. What was appearent was that very few of those books would be purchased and the books in turn would be dog eared, bent , battered and otherwise made less than pristine. The staff, in turn, seemed as though they could give a flat fuck about the state of the store; sections were out of order. Vain as I am, I wanted to yell at someone.

Charles Taylor published published an essay in 2005 in The New York Times where he asks , point blank, when did bookstores get turned into “flophouses”. His set of choicely- phrased gripes concern the way in which huge chain stores like Barnes and Noble have created atmospheres that encourage the derelicts in the population to turn bookstores into living rooms, much to the disadvantage of browsers who’d like to find a book to read and, perchance, purchase. I understand Taylor’s misgivings about bookstores being turned into playpens for the lonely, the trendy and the socially inept, and I've seen every sin of self-absorption he's described and decried.

My principle beef is with those who treat the bookstore as if it were a library, a place to either sit and read from the shelf in stages, dog-earing and chafing the item beyond saleability (pages bent down, spines cracked, covers creased and curled), or for those researching whatever complex and vaguely outlined project they've set for themselves. This second example is especially loathsome, since these folks, students with no money more often than not, appear with their backpacks and spend some time in three or four sections, taking books here and there, and then settle in someplace, usually an aisle, sitting on the floor, books open and turned upside down, with the ersatz scholars copying whole paragraphs from texts they have no intention of buying.

I have found more than one person copying pages with their cell phone cameras, an interesting method of shop lifting. We considered banning cell phone use inside the store, but were convinced by the less soured staff that such devices were the sort of thing that had to be tolerated; whine as we might, we're not in the business of telling customers what they can't do. All the same, it grates , and it greys the hair.There is nothing more exasperating than the wounded-animal look these peculiar sorts give you when we remind them (really!) that they're in a bookstore, not a library. One girl who'd been feverishly copying passages from an expensive philosophy book from a pricey university publisher actually asked me this:

“Just let me finish this one thing I started to write….” Her voice took on the squeaking whine of noisy plumbing.

“This isn’t a negotiation. Put your pen away. Do you want to buy this book?”

She was sitting in a graceless lotus position on the floor, holding the book open on her lapso that the binding continued to crack. I leaned over and took the book from her, closing it and smoothing the front and back covers with my hands. I only wish I had a snapshot of the clueless, uncomprehending expression she had on her face as her mouth gaped open and her eyes quite literally filmed over as if trying to grasp something as abstract as the idea that we were a store and needed to sell books. Sell books, not rent them, exchange them, lend them out, let you read them to a grimy pulp, photocopy them, borrow them or any other form of exchange that falls outside the boundary of a simple cash or credit card transaction.

Less attractive are the world travelers who have the money to take vacations in far flung corners and exotic niches of the globe, yet who are so miserly in their preparation that they won't purchase travel guides but will instead spend up to an hour in your store copying airline and hotel information from a current book onto index cards. There is an industry term for this sort of clientele. Here it is in the form of an inside joke. A cranky bookseller goes up to a young wannabe hipster who'd been lingering long and uselessly in the poetry section and say to him

"Young man, you remind me Jack Kerouac....”
The young poser's eyes widen at the apparent praise.
"Really," he says breathlessly.
"Yup," says the cranky bookseller,"you're both dead beats."
at April 06, 2009

Email ThisBlogThis!Share to TwitterShare to FacebookShare to Pinterest
Labels: bookstores