Tale of the proscratinating Horn dog 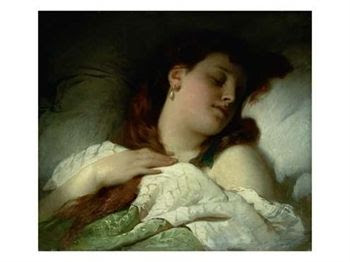 "All My Senses, Like Beacon's Flame" by Fulke Greville, a formerly obscure poet who is now being revived and rehabilitated three hundred plus years later by the preferring mentions of Harold Bloom and others, is a superb poem of directed ambivalence. It's the tale of a man who chooses the ache of desire over the pain of losing himself to the power of another being over him.

Caelica 56: "All My Senses, Like Beacon's Flame"
All my senses, like beacon's flame,
Gave alarum to desire
To take arms in Cynthia's name
And set all my thoughts on fire:
Fury's wit persuaded me,
Happy love was hazard's heir,
Cupid did best shoot and see
In the night where smooth is fair;
Up I start believing well
To see if Cynthia were awake;
Wonders I saw, who can tell?
And thus unto myself I spake:
"Sweet God Cupid, where am I,
That by pale Diana's light,
Such rich beauties do espy,
As harm our senses with delight?
Am I borne up to the skies?
See where Jove and Venus shine,
Showing in her heavenly eyes
That desire is divine.
Look where lies the milken way,
Way unto that dainty throne,
Where while all the Gods would play,
Vulcan thinks to dwell alone."
I gave reins to this conceit,
Hope went on the wheel of lust;
Fancy's scales are false of weight,
Thoughts take thought that go of trust.
I stepped forth to touch the sky,
I a God by Cupid dreams;
Cynthia, who did naked lie,
Runs away like silver streams,
Leaving hollow banks behind
Who can neither forward move,
Nor, if rivers be unkind,
Turn away or leave to love.
There stand I, like Arctic pole,
Where Sol passeth o'er the line,
Mourning my benighted soul,
Which so loseth light divine.
There stand I like men that preach
From the execution place,
At their death content to teach
All the world with their disgrace.
He that lets his Cynthia lie
Naked on a bed of play,
To say prayers ere she die,
Teacheth time to run away.
Let no love‑desiring heart
In the stars go seek his fate,
Love is only Nature's art.
Wonder hinders Love and Hate.
**None can well behold with eyes
**But what underneath him lies.

We have an erotic poem here, a distended stretch of rhapsodizing the brings us in the center of a train of thought that is sparked, fired up and colored entirely by a long and obsessive gaze. It's an interesting comparison with T.R. Hummer's poem in Slate last week, "Bad Infinity" , where the reader was likewise situated in a psychology that was arguing with the world and attempting to reconcile combating approaches to a world that appeared to be failing the narrator, much of the power of which comes from Hummer deploying a set of images culled from what seemed to be reconfigured tropes and semantic turns that might formerly neatly contextualized the world with grace and nuance but now which seemed to be falling grossly short.

Greville's poem, written over three hundred years earlier, has the narrator at the most severe pitch of an arousal wherein he wrestles with all the conflicting motions. He is something like Hamlet, lost and stalled , perhaps impaled by the metaphorical scaffolding he constructs for himself; he cannot take action so he does nothing but instead continues to settle for the satisfaction of having fashioned a new kind of language to describe an intensity that finds no resolution. As the dear Cynthia, falling under the dually imperious and self-critical gaze of Greville's horn-dogged suitor, is subjected to a stream of artful exaggerations that compare her and the feelings she creates to grander things greater than her would be lover, we have the metaphorical flow taking a turn, at first describing all that is desirous of the good lady that the observer would like to physically encounter, only to have the rationale undermined as the poetry assumes its own authority and becomes the ruling edict in this stream of obsessed thought processing. She is too fine to be touched, too near the perfection of angels to be violated, hers is a beauty that is stunning to the degree that all who behold her are made motionless, made hapless, made powerless.

Greville's character, it seems to my meager estimation, was hoist by his own explosive rhetoric , considered something thing truly beautiful and worthy of possessing but deemed himself finally unworthy, preferring instead the ache of yearning, the pining after, the perfection of a feeling that made his imagination become gloriously alive. A fear of commitment, perhaps, but most of all I think it might have to do with a fear losing of what power one things they legitimately have. The force that could coax such brilliant from a man could surely rob him of as well, and that would leave him sans anything he knew was truthfully his. This is almost a comedy of a sort, albeit a richly musical one; a man choosing his muse over the woman he believes he could love.
at March 18, 2009