The Locket, a poem by Peter Gizzi 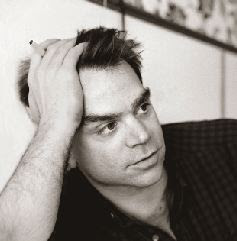 I don't know if I'd call Peter Gizzi a Language Poet, though he certainly has affinities with that group of writers. He's closer in style and sensibility to George Oppen or James Merrill, two poets who appeal to me because they have an internal monologue that attempts to assess experience through the objects that represent memory but who, unlike a fellow introvert John Ashbery, prefer a brutally adjective free manner.

There is a remove in the approach among these three writers that evokes the dislocation of coming across unfamiliar things and attempting to link the details in some useful way. Gizzi's poem , I think, is like looking inside some one's desk drawer and observing, up close, a layering of items that have been shoved there over a period of time--odd material items gathered together for no singular purpose or reason other than the collection is the doing of one individual; you stop trying to make sense of the pile as a whole and seek, instead , to profile the person, unknown and unseen, who placed the details together in the first place.

THE LOCKET
Peter Gizzi
Here is the ashtray and here
the plastic cup of cool water.


And here is the known world.
As fingers duplicate the event

of hunger. Get up. Go
to the division of various

stories and look for the naked
man beneath the stream be-

hind the house. The same
house that I does not inhabit.

The car is there. The letters
are there. And this street

leads to no particular day.
The way home remains

a mystery to those who are
looking. How else recover

what otherwise is. Lost
to the open. Space between

leaves and stones. Here
also is the neighborhood.

Lost to the open./ Space between leaves and stones./Here also is the neighborhood. The world opens up rather suddenly from the hard, specific detail one inspects and interprets, only to lose it as more details and their nuances align with the first set of assumptions; what was to be a simple explanation of a photograph, a book of matches, an odd sentence written on the back of a business card becomes complex until the accumulation overwhelms the simple timeline one preferred. The particular thing loses significance in a nuanced history that cannot be reduced. Implicit in Gizzi's poem is the idea that any recounting of personal history is something of a fiction: it's the arrangement of vaguely vetted details on which one tells the tale. But what fascinates me here is the disruption of the process--the narrator sounds like he's starting over again and yet again. The objects are concrete, but their meanings are tentative, their positions seem to shift in retelling.


There is a gaze here, a tangible poring over of things that are distinct--every object has a story as to how it arrived at the spot upon which you witness it--and it wouldn't be unusual to consider that there is an actual locket, with a photo graph or image of a kind, that itself becomes obscure as other associations are conjured. A house, a place where one lived, a photograph of a man showering naked in a stream behind the house, a familiarity of images that cannot be isolated to specific incident. Something has spurred the clipped stream, and what happens as with most times when one is attempting to assemble a full picture from the dimmest of recollected memories is that the deep past is anonymous.The way home remains a mystery to those who are looking.

What attracts me to this is the yearning to know more about the vivid glimpses, and the ache of realizing that the object is beyond your grasp. The observer of the details is denied the certainty of details the objects and their fleeting images suggest and is left, he chooses, to merely imagine what might have happened in the narrative gaps; beyond a certain age, reconstructing the earliest memories of time on earth isn't unlike interpreting what goes in in the unseen narrative leading up to what we have of Sappho's writing. The guess work becomes the work of art.
at March 20, 2009