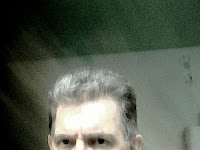 I'm the first to admit that I was an opportunist jerk more often than I care to remember when I was in college, a bright boy with a morsel of talent who had large pretensions ; I came to realize these things, though, and I've managed to fit into the skin that God gave me. That is, I sobered up July 16, 1987, the day after my 35th birthday. The gave me the gift of time, twenty one years to change my mind about the mission I came to think I had and to try a different game altogether. It's been ragged , rough and full of mistakes, you bet, but there's been good orderly direction all the same; better writing to, although there are those who'd argue contrarily.

The change of attitude has improved my writing. Kerouac, though, never had the chance to get over his over sized idea of himself as a jazz-keened godhead, he instead became bitter when the vibe went numb and the scene became crowded with people he didn't approve of--Kerouac was essentially conservative, after all. As such, he drank himself to death , bitter and disappointed. Writer Barry Alfonso and I have talked about this repeatedly since our days in college, and what he insisted on is that art shouldn't, by default, be in service to some one's death wish. Leaving a good looking corpse is a myth, he said, dead people just look dead and those who died because of drugs or alcohol just bring on sadness over the waste of not so much talent as the life that contained it. Dying young is not cool, he said, and I've remembered that.

These days I respect writers who have resilient through the years and who constantly challenge themselves with new styles and approaches--both the late John Updike and Norman Mailer are examples of these artists. Bright, brief flames for most part seem to get blown out just when they seem to be getting started with the good stuff. How many decades have we rationalized Kerouac's feckless lack of form, or pondered what Hendrix lived and learned to keep his guitar in tune?

It's a species of hero worship that obscures the newer talent: it's the idea that everything that was good in this culture has already happened , and that more recent additions to our arts are imitation, variation, and elaboration of past genius. It's an odd thing, this latter day Spenglerism, this worship of the dead, that it comforts us in times of an uncertain future. I always thought the future was ours to
at February 05, 2009