There's a new collection of verse by a great American Poet, Selected Poems 1945-2005 by the late Robert Creeley, and I'm obliged to go out and buy it. My paperback editions of his books are, sad to 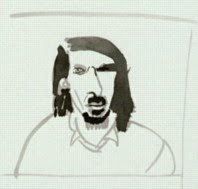 say, falling apart with that rare affliction for poetry volumes, poetry books with a cracked spine.It's a fine time to remember Creeley's mastery of the terse lyric poem, a major characteristic in a time when "lyric"for most writers mean lazy associations, odd line breaks and a verbosity that is more about extended a line than treating a subject.

What, younger, felt
was possible, now knows
is not - but still
not chanted enough -

Walked by the sea,
unchanged in memory -
evening, as clouds
on the far-off rim

I want, if older,
still to know
why, human, men
and women are

so torn, so lost,
why hopes cannot
find better world
than this.

Shelley is dead and gone,
who said,
"Taught them not this -
to know themselves;

their might could not repress
the mutiny within,
And for the morn
of truth they feigned,

Robert Creeley's poetry was the terse vocabulary of a man who feels deeply and yet has hardly a voice to equal the sensations that warm or chill his soul. It is the poetry that exists at the margins of and in the spaces between the huge language blocks of what is commonly deferred to as eloquence: they are thoughts, full formed and fleeting in their unmediated honesty of a first response to a new things or upsets, a poetry where heart and mind have no natural boundaries.

America, you ode for reality!
Give back the people you took.

you thought of first but do not
own, or keep like a convenience.

People are your own word, you
invented that locus and term.

Here, you said and say, is
where we are. Give back

what we are, these people you made,
us, and nowhere but you to be.

I sometimes consider the poet to be a film editor of perception, isolating key images and spoken lines in their spaces and arranging them in sweet and near silent succession where mood and sentiment are restrained but clearly present, nakedly expressed, without embarrassment.The surprise of his poems is that he seems to bring you to the "thing itself", without the contextualizing and taming rhetorics that buffer our responses; this is his ability to move you in ways that never feel like coarse manipulation. Creeley's was a vision with sharp-stick wit, the straightest line to a truth no one will admit seeing.

Thomas Gunn called it a "eloquent stammering." I can't think of a better superlative.
at November 17, 2008