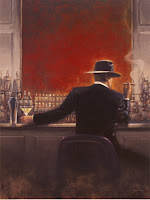 By Ted Burke
Bar drinking was fun ,as I remember it, and there tims when I miss the days when I was holding court, drink in hand, poking the shoulder of whoever was next to me while I made a point about some uselessly abstruse distinction. Twenty one years since my last drink and there are times when that memory becomes seductive and alluring, not a good thing for me to consider as an option. But there things, reminders, gifts of Providence that remind me of the bone-dead reality the bars were for somone like me; a field of defeat. Kathryn Maris has a poem in Slate this week , "Lord Forgive Me" that reminds me of the mess that was; not a lecture on drinking, mind you, just a big, ashen portrait of slow deaths in progress.

Scenes from a marriage sliding down the wrong side of the hill, toward the junkyard, the waste land, the foul pound that lies just over the horizon from every temporary bit of bliss. "Lord Forgive Me" sounds like the lament you'd under someone's breath sitting next to you at the neighborhood bar you thought you'd visit for a taste of local color, a cryptic utterence that gives you a shiver and shows you that the regulars who drink here so more than imbibe; they suffer, they regret, they fixate on their drinks with their small mantras and private prayers, they fixate on games on the television to isolate themselves from a nagging past of regrets and perceived failures and a future that promises even grayer reception. Clearly this is not a world of "Cheers", these folks do not exist for our entertainment.

So we come in mid-thought, getting a narrative as it unfolds , a consciousness that surveys the scene and the ashen images within; the prayers , the language of salvation , resurrection, of an existence made whole and purposeful, attempts to tap into whatever hand or great eye might be the director of the grand purpose of it all and beseech Him weakly to lend a hand in self transformation. But gravity is too grate, the deadness is overwhelming, the bar is full of defeat that weighs heavy. Eyes are fixated on the televised game; there is nothing but the game being played, and after the game, only discussion of the game that was played and what ought to have been done at spontaneous moments of play, and after the post mortems ,the drinks, the cigarettes, only the wait for the next game. This is the culture of funerals where one says only the kind things of another when it's their turn to speak at a wake.

Kyrie iesu christe, God above
and me below, drinking at the Hog's Head.
"So. Will you love me better when I'm dead?"
He knew it was no joke and didn't laugh

but turned away to look at the TV.
(Arsenal was playing Everton.)
Another man was fixed upon the game

and held his hands together on his knee
and chanted and rebuked. But not my man,
who recognizes neither loss nor blame.

This is the perfect cure for the romanticized Bukowskisms that have come to represent bar drinking, that there is glory and vital humanity at the bottom of all that thirst; Kathryn Maris gets the flatness, the deadness of it all, the long silences, the melancholy that colors a room after despair wears thin and angst is seen as an affectation. The sound of the tv, the random sighs and curse words, the telephone ringing , sounds that break the silence that wraps around the drinkers like a thick, fuzzy gauze. Not an attractive scene,but Maris gets it right, and her sonnet form is perfect, hard vowels, a dirth of adjectives or cluttering verbs, spare images, all arranged to balance the memory of spiritual fulfillment and the realities of what one's life and relations has become. Not a joyful poem, but a powerful one, and I admire the poet's ability to keep it vivid,brief, true to the nature of the scene, which is the sort of isolation that takes place in the most crowded places. Kathryn Maris has a poem in Slate this week , "Lord Forgive Me" that reminds me of the mess that was; not a lecture on drinking, mind you, just a big, ashen portrait of slow deaths in progress.
at September 18, 2008