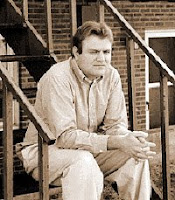 By Ted Burke
Steve Gehrke is a wonderful poet, a fine lyric intelligence who is brave enough to investigate issues of art and aesthetics in ways that suggest that our vanity is more wrapped up (so to speak)in our creation of pretty images than we were led to believe on those grade school field trips to the county art museum. Chosen for for Slate by poetry editor Robert Pinsky in November of 2005, it is not something you could easily warm up to, which is Pinsky's style. Gehrke gets to the heart of the artist's obsession with the image as a hedge against aging, of forestalling any hint or sign of his or her inescapable death. Gehrke understands the outer edge of aesthetic fixation, and in his poem "Self Portrait; Masterbating (after Egon Schiele)" we understand how the up close examination of skin, it's folds, it's unexpected contours and deviations from the perfect moment of perception can become sticky.

Our painter, aged, flabby, slow to respond either with his art or his body to stimulations that formerly would have sent him raging with inspiration and the need to cast his vision into the world, now confronts himself wizened and not wiser) save for an idea that youth is wasted on the young)and finds his gaze turned from the world he sought to remake in his image , but upon himself, his body a failing range of fleshy, wrinkles, folds of old muscle, flaccidness itself. This is masturbation as a way of remembering when the gesture, the movement, the inspiration of youth was effortless, boundless, and the reward was an overload of sensation that was reward enough for the intensity.

This is not my favorite subject matter to read, but I admire Gehrke's skill to set this potentially tasteless scene in a kind of writing that is sympathetic without a miss step into bathos or apology. Personally, I'd rather re-read Dorianne Laux's poems about giving a blow job--the subject is a better fit, so to speak, for my view of myself in the world--but the present poem commands respect. That is a poem whose scenario I could see myself in. Truth told, I see myself in Gehrke's poem as well, and all the tangled issues one can imagine it knots up ever further. It's just that I prefer Laux's wonderful words of adoration for her man. Gehrke's rumbling has at least the benefit of being well done.
at August 28, 2008