An unfair take on Derek Walcott 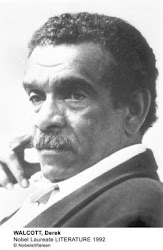 I am not a fan of Derek Walcott, and here I get the usual DW routine of reading a poet who spends an inordinate amount of time trying to make what he sees, smells,hears, tastes interesting in themselves, blessed only with an excess of qualifiers that the poem becomes something like perfectly fine cup of coffee ruined with too many spoons of sugar. It's not that I haven't tried to get acquainted with the man's work; he did win the Nobel Prize for Literature, after all, and was at the time required reading for anyone thinking themselves up on poetry. The Nobel Committee isn't infallible, though, and matched Walcott prolix poetasting in 1992 with the selection of Dario Fo in 1997, a questionably lefty playwright I think never should have been allowed the small press.
The difference, of course, is that Walcott has an audience, the same audience that sees poetry as a means to get to the Idea behind the Things we see , taste, and feel, the same audience Billy Collins more skillfully (and succinctly) caters to. And so Walcott hams up the language with digressions that offer more silt than sunshine. It might be a dual problem between reader and poet--his audience thinks he's going somewhere with the elephantine mythology he constructs, and so does the poet.
The problem, I guess, is that Walcott tries for elegance and transcendence and yet never convinces you that he's even looked out the window let alone taken a trip anywhere. There is so much rocking back and forth between obvious extremes of situation, so many adjectives and verbs seeking to convince you that details being offered are more exciting and significant because DW perceived and categorized them. It is both arch and prosaic, a monotony of routine list making.

THE SEASON OF PHANTASMAL PEACE
by Derek Walcott,
born in St. Lucia in 1930
Then all the nations of birds lifted together
the huge net of the shadows of this earth
in multitudinous dialects, twittering tongues,
stitching and crossing it. They lifted up
the shadows of long pines down trackless slopes,
the shadows of glass-faced towers down evening streets,
the shadow of a frail plant on a city sill --
the net rising soundless at night, the birds' cries soundless, until
there was no longer dusk, or season, decline, or weather,
only this passage of phantasmal light
that not the narrowest shadow dared to sever.
And men could not see, looking up, what the wild geese drew,
what the ospreys trailed behind them in the silvery ropes
that flashed in the icy sunlight; they could not hear
battalions of starlings waging peaceful cries,
bearing the net higher, covering this world
like the vines of an orchard, or a mother drawing
the trembling gauze over the trembling eyes
of a child fluttering to sleep;
it was the light
that you will see at evening on the side of a hill
in yellow October, and no one hearing knew
what change had brought into the raven's cawing,
the killdeer's screech, the ember-circling chough
such an immense, soundless, and high concern
for the fields and cities where the birds belong,
except it was their seasonal passing, Love,
made seasonless, or, from the high privilege of their birth,
something brighter than pity for the wingless ones
below them who shared dark holes in windows and in houses,
and higher they lifted the net with soundless voices
above all change, betrayals of falling suns,
and this season lasted one moment, like the pause
between dusk and darkness, between fury and peace,
but, for such as our earth is now, it lasted long.

This is the kind of self-consciously literary language that ruins the literary experience for millions of readers who otherwise wish to be transported through a brilliant use of language. The theater advice applies here, "don't let them see you act", meaning that the effort to evoke conditions and states of experience through artistic means should seem effortless; the technique should be invisible , unnoticed. The artful should conveyed without the conspicuous essence of art. Walcott's poems make think of a man who wants to let you know that he's a poet, that he is a wordsmith.The elegance for the sake of elegance always seems more the subject in Walcott's poems, or the point of the writing; the subject exists primarily as a means to display  his  virtuosity. The net effect, in my readings of him on an off for twenty years or so, is a stalling tactic--the undecidability isn't an Ashbery like conundrum after one of his intense and relatively compact scrutinies between his Stevens-like formations of perfect Ideal Types and the world independent of the senses. In Ashbery's and Stevens' cases, the point of the poems was to evocatively ponder the distance between perception and a material existence that will not conform to the demands of brilliant language. That creates tension,suspense, irony; there is intrigue and there is reader interest in what the poet makes of it, if anything.
Success, though, depends on how      well the language used to accommodate the subject and ideas being subjected to the kinds of extra-critical interrogation. For Walcott, it too often seems a case of indecision of what to settle on as a nest of notions on which to write and instead obscuring that blankness with sparkling qualifiers that , after a point, enhance not ideas or emotions but rather emptiness, a lack of anything interesting to say.  It's not for me to demand what this means because that's the least interesting thing to worry about in a discussion of a work, but I would expect a competent poem to at least be able to evoke sensations, associations and the like toward a satisfying ambiguity; a certain genius with the language is required, and Walcott, Nobel Prize or no, hasn't that genius. The banal poeticisms of "soundless voices", "betrayals of falling suns" "the pause between dusk and darkness" and the like are arty rather than artful, It amazes a certain readership,but to me this borders on kitsch.
at July 04, 2008