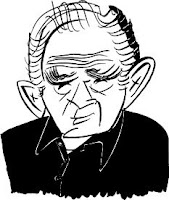 Mailer had said that he wanted to write something fast, nasty and fun after the time and energy he lavished on two of brilliant and more ambitious projects, Ancient Evenings and Executioner's Song. Tough Guys Don't Dance is that book, in the tradition of Chandler, Hammett, Ross MacDonald.

Tim Madden wakes up after a long life of wasting away as a binging alcoholic and finds his bed drenched in blood; later he finds his wife's severed head in a secret pot stash. He, however remembers none of it, and this provides Mailer ample room to ruminate about the metaphysics of hangovers and black outs and the perversions one finds themselves willing to commit when wealth and power are at stake. The cast of characters are unruly, pinched in the nerve and casting a faint whiff of what one imagines the store room where Dorian Gray's portrait was held in sick secrecy. Madden, hardly an innocent , stumbles and routs about trying to piece together the events of his last binge, terrified in the possibility that he might well be his wife's killer.

This is the most horrible of personal journeys, the saga of a man seeking evidence as to whether he's a monster or merely a hapless dupe.Mailer's prose is breathtaking and poetic, and creates a tension with the gamy undertakings of the plot. This is not one of Mailer's masterworks, not be a long shot, but it has verve and drive and a splendidly sick wit, and it reminds us that Mailer can construct an odd tale and twist it in any direction he pleases. Among the considerable graces of one of Mailer's most controversial novels An American Dream were the flights of poetry and jazz-tempo'd cadences the late writer could draw from the paranoia and psychic dissolution of an alcoholic finding himself crushed by a world he could not will into his designs, and Tough Guys has much of that desperate, tragic elan coursing through it's noir-toned narrative. Think what you may of Mailer the masculinist, Mailer the artist was an acute witness to an embattled soul accommodating powers greater than itself.
at June 29, 2008