Notes on a poem for 2 upcoming anniversaries 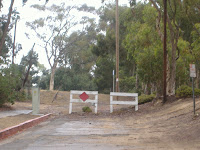 I am under a month away from two special occasions, a birthday when I will be six years past the half century mark, and the day after that, on which I will have twenty one years sobriety. Thank you, thank you. The goal today is not to die or take a drink before the crucial days in July; in any event, I've already been to rehab, at the Betty Ford Center in fact, in Rancho Mirage, California, in the Palm Springs area. What I love the facts of my sobriety date is that I can honestly say that "I went to the desert to dry out in town called Rancho Mirage", amusing myself with the low irony of mashing the cliche of alkies "drying out", the desert being the driest clime one might choose to live in, and that the town name summarized what I felt July 16, 1987, the day after my thirty fifth birthday, the feeling that what was happening to me was unreal, unprecedented, consciousness expanding,in its own way. What I knew at the time was that I couldn't stop drinking nor stop the wreckage my worst habit created, and that the first night in treatment was also the first time in a decade that my head hit a pillow without having a pint of vodka to ease my into rough slumber. Anyway, all this musing over what it was like , what happened and what it's like now through the last week prompted this poem tonight; I've also been reading Berrigan, O'Hara and Padgett lately, some of each shows up here. At the near age of fifty six and with nearly twenty one years sober, I trust something of my own style seeps through the influence.

as it goes
this year
this month

i am 3 sheets shy
of a coastline to
walk upon

and Summer
close behind
another year older

in every cents of the word

talking the same old lines of how-do-you -do

and
did you read those
books i lent you?

it's 3 clean sheets
that hang on the line,
the same phone number
for 10 years since moving day

it rained last night
a mist wraps around the homes on the hill
beautiful traffic rushes forth
through the fog and green lights,