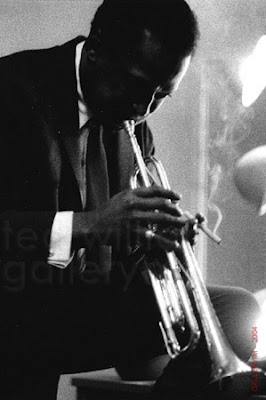 I'd normally put this poem at the bottom of things to be read and evaluated, given that it is yet another poem in a long string of tributes to jazz legends; the results I've read or heard from thirty years of open readings, workshops, and editing anthologies are that most of the attempts to get to the core of the improviser’s art are ham-handed and none-to-fresh (nor particularly musical). Davis, Parker, Ellington, all have had their names evoked and their legends dragged through a white jazz critic's generalizations about music, suffering, and black folks and their innate "soulfulness" and rhythm, through which a sort of benevolent racism can be viewed, the mythical good intentions of the humane plantation owner who sought to be kind to "his children". It's not a topic category that's ever yielded much in way of revelation or poetic effect for me; the revisionist poems, ostensibly written by mostly white poets to honor a black American art form, made me think of the stale paternalism that was, after all, is said and done, merely another attempt to define non-white traditions within American history and defuse them of any quality a group might take to define their experiences in terms other than what the Caucasian canonThat said, I think Peter Balakian’s poem “Blue” almost works as the poetry equivalent of the sound of Davis’ trumpet. Void of the generalizations and ersatz sociology that have made this sub-genre in urban poetry a laughable species of verse, Balakian approaches the poem much the same as Davis might have approached his solos, focusing on the mood of the moment, the suggestive textures of a note bent against a modal piano figure and the quiet rumble of bass and drums creating a host of alluring shades, tones and coloration , a space that is about the problematic personality rising above and over defects of character and external hindrances to happiness and creating those series of moments that are sublime, pure, unaffected bits of harmony and beauty, albeit a loveliness tempered with the doings of a scornful cityscape. Balakian chooses interesting words for his impressions of listening to the Davis group; the city is transformed, it becomes something new, if briefly, for Balakian’s rhapsodic narrator and this must be the transcendence Davis himself must have felt when this music was played.

after soot and rain and rush,
the Ferry out of sight,

my bones electric with the hum
of the cable of the Bridge at 3 a.m.

and the dying lights of the Bowery.
Bill Evans making the rain thin

to a beam of haze before the
horn comes back from underwater.

New York seems lovely and quite habitable even by the timidest of us; it becomes not the most sophisticated and elegant place in the world, but rather, with the music from Miles' transubstantiating phrases, is the world where each and every crook, thief, liar, cuckold, and cheat assumes grace, finds a place, blends in with a rich backdrop of wise, somber hues that make up the thick and awe-inspiring skyline. The city with its traffic, racist cops, crowds, posers, slums, jerks, geniuses, writers and money-grubbing capitalist becomes transformed, cast in a softer light, rinsed with soft rain, tall buildings seen in water puddle reflections and blurred neon nightclub signs burning away the mist just enough for you to who is furnishing the soundtrack. This is a cityscape that exists only in black and white photographs carefully framed to produce an effect, but Balakian is writing about how Davis’ music from this period made him feel about the quality of his life in a dense urban center. That he does it with a modicum of hyperbole is a wonder, and the final lines about Bill Evans clearing away the rain and Davis’ horn resurfacing after an absence is the subtlest description of a jazz group’s interaction I’ve read in years. Of course, it makes no literal sense. It’s a poem, and a good one.
at June 12, 2008